With nearly 70 years of independence, Indonesia prides itself as a nation founded upon the sovereignty and self-determination of peoples who call the Nusantara archipelago their ancestral homeland. Unfortunately, the same Indonesia tends to discriminate against and criminalise indigenous communities whose lifestyles and livelihoods may clash with the dominant society’s interests.

Handcrafted Films’ documentary If Not Us Then Who? follows various indigenous people whose livelihoods and cultures depend directly on the local forests. “These peoples exhibit the same level of passion, commitment and sacrifice to protect forests all over the world and fight the uphill battle against big industries,” said project director Paul Redman, a long-time forestry activist and award-nominated filmmaker.

Working together with the Alliance of the Indigenous Peoples of Nusantara (AMAN), Handcrafted Films screened If Not Us Then Who? in Jakarta. Indigenous leaders from Indonesia and abroad were invited to tell their stories of fighting for their peoples’ dignities and right to live as citizens of countries ruled by capitalist interests. Compiled over two years by means of community participation in various parts of Indonesia and Latin America, a segment of the film tells the story of Tobelo Dalam, an ethnic group of Halmahera, North Maluku.

While Tobelo Dalam have a real dependence on forest resources for their nomadic subsistence farming and hunter-gatherer lifestyle, the Government takes liberty in granting exploitation rights of their land to corporations, mostly mines and oil palm plantations. With the help of AMAN and Cipta Media Seluler, Tobelo Dalam now implement an SMS monitoring system to control illegal logging, and are working on mapping their customary ancestral forests to make the case for their rights to land and natural resources.

According to AMAN, Indonesia still has 70 million hectares of customary forest, including 40 million hectares of primary and secondary forests. But just because a forest looks pristine, it doesn’t mean that there is no concession license over it. It is not unusual for a forest area to be claimed by two to three conflicting concession licenses, in most cases illegal. When indigenous people are without papers, it makes them defenceless before legal entities who want something from their land and have the power to manipulate the law to suit their interests. 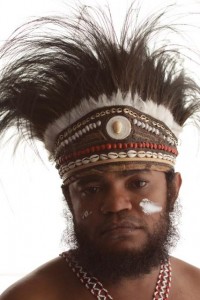 Because many indigenous minorities still practice ancestral religions, many cannot get national ID cards (KTP), marriage certificates, and birth certificates. Their children cannot go to school and they miss out on their rights as citizens – discriminated against and criminalised by the very state that’s supposed to guarantee their access to public services.

Though the RUU Masyarakat Adat (Indigenous Minorities Bill) is scheduled for the 2014-2019 National Legislation Program, legislature has failed to prioritise it for 2015. Many existing laws and regulations concerning indigenous minorities also conflict each other. 14 ministries conduct indigenous affairs, mostly by competing for projects and the biggest budgets, and showing off things that look good on paper, such as community development, resettlement, and cultural tourism. But when it comes to dealing with land tenure or discrimination, these ministries wash their hands.

Reconciliation means indigenous communities are given local autonomy to exercise their customary traditions safely and peacefully in their homelands. It also means legal recognition of indigenous communities and their individual members, access to economic empowerment through cooperatives and credit unions, support in conserving and rehabilitating their natural environment, mapping indigenous territories that are recognised in the development of national infrastructure, giving indigenous communities room to contribute to the advancement of the nation, and mutual connectivity with the central government.

When the community tries to communicate these problems to the Government, their cries fall on deaf ears. This is unlikely to change soon, due (amongst other things) to mapping problems in indigenous territory. In order for community-participative mapping to be recognised, representatives of the Government must be present throughout the process – and yet when invited, the Government is often reluctant to attend. Additionally, concession holders are often urban Batak who have land rights by clan relations, but have little, if any, regard for clan rights as a community.

Candido Mezua, president of the National Coordinating Body of Indigenous Peoples in Panama said that reconciliation in his country was achieved through 90 years of struggle and 74 years of war. This was coloured by discrimination, criminalisation and even bloodbaths not unlike those which happen in Indonesia. Today, 22% of Panama’s land is recognised as indigenous territory, but 11% is still in dispute.

“We cannot blindly trust the Government to make forestry decisions on our behalf because the forest concerns the livelihood of indigenous communities. To gain respect for our culture and recognition for our territories, indigenous people need to unite, not only nationally but internationally as well. We are not against development – rather, we are for the kind of development that respects our livelihoods and ways of life.”

The main points of struggle for indigenous peoples, according to Mezua, concern earning respect for indigenous culture, recognition for the sovereignty of their territories, and formal prior informed consent when outsiders intend to gain access to their homelands. “Others can kill us, but not our identity nor our culture. We must have sovereignty over our homelands. Unity is the key,” said Mezua. He adds that he admires the struggle of uniting millions of indigenous people in a big country such as Indonesia, compared to uniting 10,000 indigenous people within Panama’s population of 3 million.