(Disclosure: The following is part of a media partnership between Tech in Asia and Indonesia Expat. Tech in Asia invites all international entrepreneurs and investors to Balai Kartini for its annual Jakarta conference on November 16 and 17.)

Indonesia’s biggest technology startup conference Tech in Asia Jakarta 2016 will be held on November 16 and 17 at Balai Kartini. Thousands of participants, many of whom are foreigners living in Indonesia, will flock to the venue to exchange name cards and build their network on the quest to disrupt traditional industries.

With this in mind, here are five interesting foreigners that you might want to bump into if you’re going to the event:

Female venture capitalists are still a rare sight, according to Tech in Asia. Hailing from Thailand, Suraphongchai graduated from Stanford Business School where she took a strong interest in the tech sector.

She’s worked at Lehman Brothers, opened a couple F&B businesses, and is now hunting in Southeast Asia for the next big tech company to invest in. Suraphongchai represents Indonesia-based venture capital firm Venturra Capital. If you’re raising an investment or just wanting to understand the overall funding ecosystem in Southeast Asia, she’s the person to talk to.

Ng is a popular figure in Southeast Asia’s technology industry. The Malaysian is well-known for telling it like it is, and because of that, his stage talks have always been very interesting to conference attendees.

Ng is a seasoned entrepreneur, having “exited” his previous two tech businesses: a Groupon clone in Malaysia called Groupsmore and a social news network in Southeast Asia called Says. He is now an investor at US-based venture capital firm 500 Startups, and is on the lookout for early-stage tech companies to invest in.

Despite being super busy, Ng is always open to meeting with new friends and giving feedback on your tech business concepts.

Williamson is a veteran in the digital space, having gained experience building new businesses across Asia. His last stint was at Indonesia’s media conglomerate Emtek, where he was responsible for the group’s online investments.

Today, he’s building his own venture called Otobro, a Singapore-based car marketplace. Expats who are still trying to decide whether they should quit their full-time jobs to pursue entrepreneurship in Indonesia might want to say hello to Williamson.

This Korean expat, whose business revolves around looking up food recommendations in Indonesia, is responsible for Qraved, a food discovery platform in the archipelago.

Prior to Qraved, Kim previously helped build a host of tech companies in the region, including fashion e-store Zalora Singapore and an AirBnb-like venture called Wimdu. Kim has dozens of entrepreneurship war stories to share, and perhaps dining recommendations if you’re hungry in the Big Durian.

As the director of content strategy at Tech in Asia, Corbin is the one who came up with all the content of the conference. Also, he is the one who invited all the speakers and moderators to the event at Balai Kartini.

If you have  questions about the event or are just looking for the latest gossip in Asia’s digital ecosystem, this American is probably the best guy to talk to.

Tech in Asia Jakarta 2016 ticket prices are as follows: US$299 for a startup pass, US$459 for a general pass and US$599 for an all-inclusive investor pass. Feel free to use this code for a 20 percent discount: tiajkt16indoexpat20

Please note that the above code is only claimable until November 15, 2016 and it is only available for 20 participants. 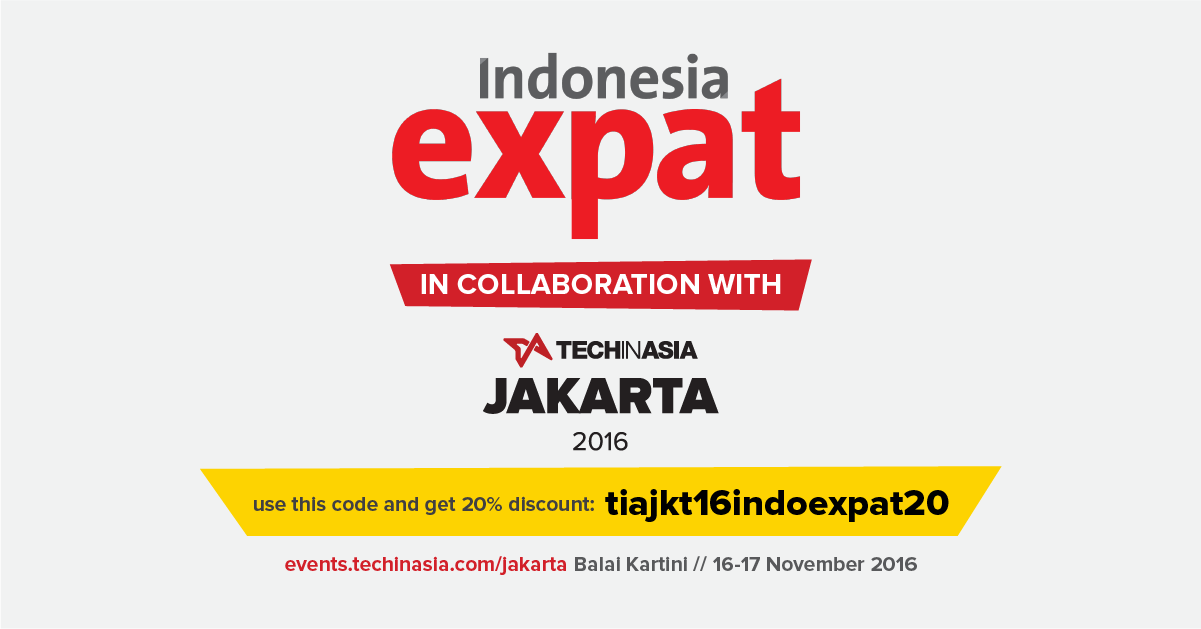 A Tribute to Alan Nye

Getting Hired with JAC Recruitment Indonesia

A Dating App That Makes Genuine Connections Possible in Jakarta