Choice destinations for weekend cycling in West Java are often impractical because of poor access. Lido, for instance, is a very pleasant recreational area with a beautiful lake, riding trails, paragliding and a resort hotel. However, the only way to get there is along ‘The Path to Death’, aka Jalan Raya Sukabumi, from the end of the Jagorawi Toll Road. There are numerous other hot trails for bicyclists in West Java, but getting there is a real challenge.

Puncak, once a delightful weekend hideaway, is today an unspeakable six-hour drive up to smoggy, jammed-up Cipanas. It’s actually more like a mountainside parking lot, as weekends will trap you in your vehicle enjoying an interminable view of the tea plantations.

Ditto for the west coast. By the time you get to Anyer, Carita or Labuan, fairly interesting cycling areas, all the enthusiasm is beaten out of you.

So where to go? My enthusiastic suggestion is Lampung Province, at the southern tip of Sumatra, but with a key qualification: you have to first battle your way from West Jakarta, through Tangerang, Balaraja, Serang and Cilegon, to industrial Merak, and then survive a rather uncomfortable three-hour ferry jaunt across the Sunda Strait to the Port of Bakauheni.

Once you disembark in Sumatra, however, the world seems to open right up: it’s a broad, fierce landscape with rough natural grandeur — at least compared to overpopulated West Java.

What I normally do is hire a small pickup to carry bicycles and riders down the bumpy toll road from Kebun Jeruk to the Ferry Terminal at Merak. I can usually hammer drivers down to Rp.400,000 for the trip. 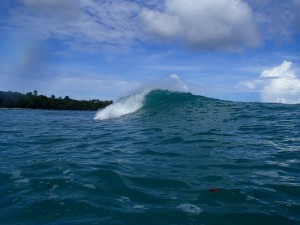 Ride the bicycle or motorcycle onto the Ferry, for a few thousand Rupiah, and Bob’s your uncle. The two and a half hour trip across the Sunda Strait is scenic and uneventful, unless you’re hapless enough to be trapped in the late Bahuga Jaya, seen here en passant, as some sleepy captain ran her into a passing tanker one early morning last year and she sank like a stone to the bottom, reducing the population by seven hapless passengers.

Be warned that the Sunda Strait ferries are a favourite of pickpockets and other gangs of thieves, who will break into locked vehicles and ransack them, unless someone stays inside on watch. Seriously. Keep an eye on your car or bike for the duration of the trip.

There are good bicycling roads abound in Lampung Province once you escape the heavily – travelled Bakauheni – Medan artery highway. Riding uphill from the Terminal through smoke and heavy truck traffic is only for the ultra-hardcore. Better to start your cycling journey at Bandar Lampung, the pleasantly green capital of the Province, an hour by car from the Ferry Terminal. You can usually rent transport, with patience and haggling.

Bandar Lampung is worth an evening’s stopover, after the considerable struggle to escape polluted West Java; we usually stay at the Hotel Hartono, a modest, two-star place with a magnificent view of the Bay, and a tribe of macaques who swarm up the balcony, demanding food from guests.

From Lampung, head west on good roads with little traffic, to Kota Agung. The cycling journey I’m describing forms a rough quadrangle, combining riding and transport. Map it out on Google Earth with the four points as Bandar Lampung – Kota Agung – Krui – Kotabumi, and back.

Bicycling from Bandar Lampung to Kota Agung is fairly flat but a challenge in hot weather. I normally take the bikes on a local bus: the conductor just piles them on top of other passengers’ assorted baggage, for an extra Rp.150,000.

During this trip to Kota Agung I had a Dahon Matrix, a full-size folding bike that was perfect for mixed riding and loading into the baggage compartment.

Kota Agung is a busy fishing port, on the vast Teluk Semangka (Watermelon Bay) enclosed by the peninsula of Bukit Barisan Selatan National Park. Fishing boats come in just after dawn with their catch, which is then auctioned on the spot. There are inexpensive seafood restaurants along the highway; it’s best to stay overnight in neighbouring Gisting. Energetic bicyclists can ride up nearby Tanggamus Mountain.

From Kota Agung, it’s over the mountains to the west coast, another challenging uphill bicycle ride. Motor traffic is generally light; if you tire out there’s always someone with a pickup truck who will carry you a bit further. Travelling through the National Park early in the morning, you will be serenaded by the whoops of troops of siamang (gibbons) — their screams easily travel five kilometres, in the quiet of the forest. 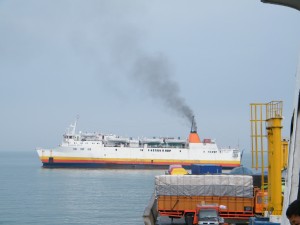 The west coast is grand, with sweeping, undeveloped beaches as far as the eye can see. There is a lively surfing camp business at Krui, a fishing village up the coast. Long-time expatriate Zane Redman runs Hotel Zandino, one of a number of economical (under Rp.200,000/night, with meals) surf lodges. Caution is highly recommended with western waters: while local people are friendly and accommodating, roads are lightly-travelled and reasonably safe, the ocean will kill you. There are strong undertows and you can get battered along coral reefs.

We turn east from Krui, heading for Liwa. It’s a pleasant uphill ride, back through the National Park.

An hour to the north is Danau Ranau, a gorgeous, ominous lake reminiscent of those in mountainous Austria. Lake Ranau is surrounded by mountains, with a symmetrical volcano to the west. Accommodation is poor — all but starless; as a hardy cyclist, you can put up with a pathetic losmen (“last resort” resort) for a night. Hiring a boat to traverse the rough, windy black waters of the lake is well worth the effort. Good riding roads too.

Then it’s a grand ride eastward, through the mountains of Bukit Kemuning, to Kotabumi, where you catch the busy axis highway down to Bakauheni. Best to seek transport for the bicycles and save the harp-playing for later.