It was a fine day in Benteng, Selayar. The 100-kilometre long island just off the southern coast of Bira, South Sulawesi, is known to some as a diver’s haven and marine biodiversity hotspot, but in a different way from Bali, Lombok, or Raja Ampat.

The streets of Selayar parade rustic wooden houses elevated on stilts, painted in bright colours. The air is mostly warm with the sunshine, but fresh and breezy like the sea. The landscapes flaunt the unpretentious sights of fishermen’s boats by serene beaches and friendly community hubs; wet markets, warungs, multifunctional soccer fields and dive centres.

One of the highlights of this trip was visiting Kampung Penyu in Desa Barugaiya, Bontomanai. Kampung Penyu, which covers about a kilometre of the west coast of Dusun Tulang, is laced with mangroves and swamps that lead to this black sand beach with coconut groves and the blue waters of the Flores Sea.

In the sand is this fenced area with blue tags on it. It is the grounds on which turtle eggs are incubated, marked with the expected hatching date, number of eggs, and the name of the person who has adopted them.

Sharben from the Sileya Scuba Divers is one of the initiators of Kampung Penyu. “It’s our mission to raise awareness among the residents of Kampung Penyu to guard our ancestors’ homeland and the wildlife that has made it home,” he said.

My travel companions and local children instantly lightened up as Sharben brought a bucket filled with hatchlings in water. As we gathered by the shore, Sharben showed us how to release these young turtles to the sea. “Put them on the ground with their back to the sea, and let them instinctively turn around to find their way into the water,” instructed Sharben.

My friends – divers from Bandung and Jakarta – turned the ritual into a game by lining up the hatchlings and racing them to the waters over handmade obstacles and ditches. But silly humans couldn’t fool the poor critters, which proved themselves smart and powerful enough to paddle their way to the sea in a matter of minutes. 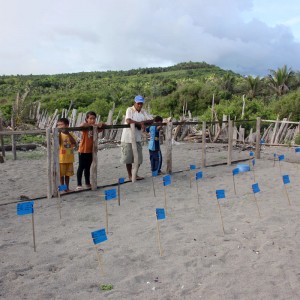 “Only 10% of these hatchlings would make it to adulthood and produce offspring of their own,” said Sharben. 90% would either fall prey to natural predators such as sharks and seagulls, or die due to human threats such as bombs and chemicals.

In Kampung Penyu there are three species of turtles, including the Hawksbill sea turtle (Eretmochelys imbricata), the green sea turtle (Chelonia mydas) and the Olive Ridley sea turtle (Lepidochelys olivacea). Despite all being cosmopolitan species found in tropical waters all over the world, their conservation statuses range from vulnerable to critically endangered.

The idea for Kampung Penyu was conceived in July 2012 when Sharben came home to Dusun Tulang in Barugaiya to take care of his family’s land. He stayed with Datu, a close relative and community leader. Together they started a conversation about turtle eggs, which Sharben’s grandfather used to consume on a daily basis when they were young.

In August 2012, Sharben, Datu, and two friends from Sileya Scuba Divers Benteng inspected the coast of Tulang for remains of turtle nests. It was past breeding season. Instead, the men found that the beaches were littered with marine debris carried by the Western Monsoon, creating a hazardous environment for spawning turtles.

Since then, members of Sileya Scuba Divers have been regularly meeting in Benteng to start a campaign against the sales of turtle eggs. They invited members of the community and installed banners in the local markets to familiarize them with laws protecting endangered species.

In order to gain community support in eradicating the sales of turtle eggs, Sileya Scuba Divers compensate poachers Rp.1,000 per egg – well above the market price of Rp.800 per egg. Starting in February 2013, inspections were held in local markets to save turtle eggs. 85 eggs were rescued then, with redemption compensations donated by the Takabonerate National Park. In late March, three of those eggs hatched. The rest were damaged from having been rinsed with fresh water in the market.

After the sad incident, Sileya Scuba Divers invited locals in Tulang to build proper protected nesting grounds for turtle eggs. Beach cleanups were also organized to ensure that mother turtles have safe places to lay their eggs. On 22 April 2013, while celebrating Earth Day with the local government and a travel community from Makassar, the project was christened as “Kampung Penyu”. In early May, 102 out of the 104 eggs nested in Kampung Penyu hatched. The hatchlings were released to the sea the next day.

Today, Kampung Penyu is a self-sustaining project funded by members of Sileya Scuba Divers and donors. There is currently only one continuous donor, but many opportunities for one-off donations through its turtle eggs adoption program or tours in Kampung Penyu.

“I wouldn’t have started and continued to support this project if it didn’t benefit the local community,” said Sharben. He said he hopes that Kampung Penyu will ensure that future generations in Selayar will still get to see the turtles that call the island home.

In a peaceful and relatively secluded small island where local life is a love affair with the sea, it’s easy to think that Selayar is now free from environmental threats to its wildlife. The truth is, even Selayar’s marine conservation challenges are still many.

Conserving sea turtles are never exclusively about saving one or a few species. Rather, it requires the orchestration of protecting the entire ecosystem in which they live. With many factors beyond the community’s control – irresponsible netting, fish bombing, chemical fishing, coral bleaching, marine debris coming from other places – there is so much more to saving the turtles than safely hatching their eggs.

While Selayar is no unspoiled paradise, there is still a lot of beauty in its blissful landscapes and zestful underwater life. And the fact that young locals are doing something to conserve it offers hope that the beauty will remain there a little longer.