The one hundred and eight passengers and crew onboard the Lion Air flight from Bandung to Bali on Saturday afternoon 13 April 2013, which landed at 3:10 pm, 50 metres short of the apron, are the luckiest in airline history.

While details are still emerging, it appears that wind shear may have been a factor which caused the pilot to say we were “dragged” from the sky as the plane hit the sea atop the narrow coral reef in front of the runway and came to a violent stop.

Lion Air, a company registered in Indonesia in 1999, and which started operating with one aircraft in 2001, has grown to be Indonesia’s largest airline accounting for reportedly 45% of all flights by 2013 and seventy plus destinations. Unfortunately, it also has had the most aircraft incidents of any Indonesian airline over this period – six in total, though only one fatal when 25 people died after one of its planes crashed on landing in Surakarta, Solo, in 2004.

The airline, owned by two brothers with one, Rusdi Kirana, being its CEO, aims to have some 700 aircraft flying by 2025, 12 years’ time, making it one of the biggest, if not the biggest,  low cost airline in Southeast Asia at that time. Both manufacturers’ new aircrafts are the most fuel efficient ever.

On the basis that the best way to respond to this incident is with humour, here we look at the job its fictitious advertising company has been given to come up with some new slogans to get more people, many of them new customers, to fly Lion Air.

Some suggestions from the advertising execs for Lion Air’s new advertising campaign include . . .

We guarantee every flight gets you to your destination.

Another first for Lion Air – the only airline that has ever dropped off its passengers in the sea and all survived. Wet, yes. But alive.

So let us take you up high for the experience of a lifetime. Fly Lion Air soon.

Fly Lion Air. And give new meaning to being a member of the “high flier” club.

Lion Air drops you in the drink.

Whether you’re six or sixty, Lion Air guarantees you your most memorable flight ever.

“Forget city to city, Bandung to Bali. Just bring a towel, we’ll drop you right on the beach.

Now that’s customer service for you.

Who says our staff are over worked and underpaid. Our two lucky pilots will have to answer a few questions from crash investigators so we have obliged by grounding them for two weeks on full pay. That means they get to go home EVERY night.

Fly Lion and get your medical bills paid.

Lion survivors get a Rp. 25 million bonus insurance payout and free travel to their next destination – guaranteeing they’ll fly with us again and again.

True, five Lion Air pilots were arrested for being high on drugs in the past two years. It’s a recreational habit you see. They just want to be up high all the time!

Fifteen months ago Boeing agreed to supply Lion Air with 230 new aircraft over the next 12 years – that was Boeings largest order ever. Airbus came back with an even better offer signed just a month ago for 234 new planes over the next 12 years, its largest order ever.  Lion Air, together with some other Indonesian airlines are currently banned from flying to Europe and the USA. In the meantime, Lion Air have undertaken to test both makers’ aircraft to destruction.

Lion Air is following in the footsteps of Tony Fernandes’ AirAsia in trying to be Asia’s largest low cost airline. With so many planes to park, AirAsia has its global hub at Kuala Lumpur.

Indonesia’s newest airport hub is to be at Singaraja which means Lion King – will this be Lion Air’s new kingdom, too? 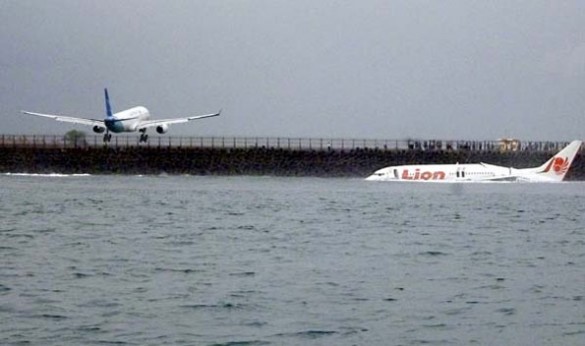 A Lion Air Boeing 737-800 NG for New Generation aircraft, registration PK-LKS performing flight JT-904 from Bandung to Denpasar (Indonesia) with 101 passengers and  seven crew, was on approach to Denpasar’s runway 09 at about 15:10L (07:10Z), but came to a stop in the sea short of the runway, the aircraft broke up in two parts. All occupants were evacuated from the aircraft and have been taken to hospitals with minor injuries (scratches).

The airline confirmed flight JT-904 went into the sea while landing at Denpasar Airport. The aircraft PK-LKS originated in Banjarmasin and was scheduled to fly to Bandung (JT-945), Denpasar (JT-904) and back to Bandung (JT-905). The aircraft was directly received from Boeing on Mar 28th 2013 and was in operation for just about two weeks, it is a different one to the former PK-LKS/9M-LNB. The captain on the accident flight was highly experienced with more than 10,000 hours of flying experience; he was and is in good health condition.

Getting into the Holiday Spirit