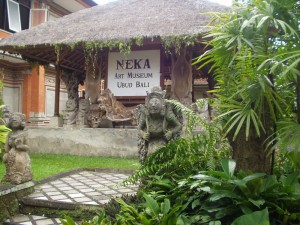 Setting out on a Sunday in the slow season, an unexpectedly ideal day to visit museums, the famous Neka Art Museum was easy to find opposite the equally famous Naughty Nuri’s in Sanggingan. The recommended circuit of the whole complex of seven major exhibits or “halls” starts with the wayang-style painting gallery straight through the door right off the lobby.

This was the first of a series of exhibits that my host Pande Suteja Neka led me through that covered every style of art from impressionism to abstract expressionism. Each turn presented something surprising —a new school of art, rooms full of vigorous contemporary pieces, galleries devoted to portraiture, East-West art or artists from abroad.

A few painters – Dutch-born Arie Smit and I Gusti Nyman Lempad who died in 1978 at the amazing age of 121—have their own pavilions. A photography center featured selected photos by American Robert A. Koke who opened Kuta’s first hotel and brought surfing to Bali. Taken between 1937 and 1941, the old black and white images showed dancers, ceremonies and village life during Bali’s short-lived age of innocence.

The galleries display a total of 320 consummate artworks, 30% of which are Balinese, 30% other Indonesians, and 40% foreign artists. It took Pak Neka 40 years to amass his collection, which is so all-encompassing that art students from Bali’s Udayana University must study its works in order to graduate. Pak Neka opened his first gallery on Ubud’s main road in 1966. In 1975, he traveled to Europe with Rudolph Bonnet to study museums. The Neka Art Museum was opened in 1976 and officially recognized by the Indonesian government in 1982.

Our tour ended in Pak Neka’s beloved Keris Exhibition Room, one of only two in all of Indonesia dedicated to Indonesia’s renowned wavybladed daggers. “My real roots are as a blacksmith,” he told me. “Keris are my calling in life.” The pande part of his name indicates his place among a long line of metallurgists. 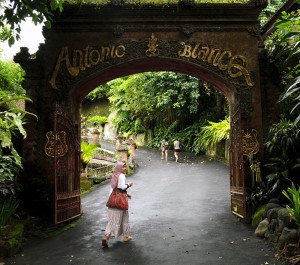 I met Antonio Blanco, wearing his trademark beret, in 1972 when a friend and I strolled across the old one-lane iron bridge in Campuan and turned up the steep winding driveway shrouded in trees. One of his daughters was winnowing rice bare breasted in a corner of the inner courtyard. The 60-yearold Catalonian artist, an amusing and intriguing character with a theatrical personal style, came out from his studio to greet us. Now the modest gallery we visited over 40 years ago is buried within an extraordinary three-story Italianate rococo structure guarded by two giant mythological stone dragons and a 15-meter-high green marble archway at the top of a long flight of steps.

Don Antonio Blanco, born in 1911 in Manila, arrived in Bali in 1952, drawn by Covarrubias’s book Island of Bali. Within a year, he had married Ni Rondji, his first model and well-known Balinese dancer. He was 42, she was 17. His wife’s likeness is enshrined in a huge painting, entitled simply “Balinese Dancer,” on the back wall of the ground floor.

A narrow stairway led down to the family veranda just off the maestro’s original studio, preserved exactly as he had left it. I shook the hand of Mario Blanco, Antonio Blanco’s only son, a highly respected artist in his own right. The walls covered with family photographs, some from the 1950s, recording phases in the lives of several generations, as well as friends, other artists and VIP visitors. Mario pointed to one in which the Grand Maestro was posing with Michael Jackson. 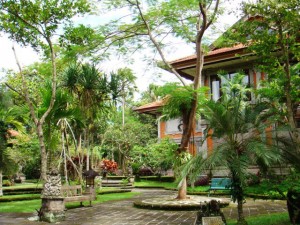 Not just a museum but a dynamic all-inclusive culture center of the arts, ARMA in Pengosekan comprises exhibits, conference hall, art gallery, performing stage, dance classes, bookshop, boutique, reference library, Thai restaurant, coffee shop and rice fields all spread over six hectares. Acting as a virtual ambassador of the arts, Agung Rai began his professional career in the late 1960s selling souvenirs and paintings to tourists on the hot stands of Kuta Beach. With a sharp eye for quality and a deep knowledge of Balinese painting, he built a reputation for honesty and tenacious support of local artists, eventually becoming one of Bali’s most successful art entrepreneurs.

With his earnings, Agung Rai opened his first gallery in 1978 and ARMA was opened in 1996. Containing 250 paintings on permanent display, the collection is housed in two massive thatched roofed high-ceilinged Balinese-style structures, one displaying traditional art and the other contemporary art.

In the 1st floor gallery are somber paintings from as early as the 1940s, the little ambient light rendering the magically charged demons and spirits even darker and more ominous. Extravagant wall space was devoted to these old relics. Down a stairs to the ground floor, I confronted a fearsome pair of Barong Landung puppets with exceedingly rare gringsing double-weft ikat cloths, Kamasan-style paintings and old decorative carved wood panels.

The most captivating was the Walter Spies exhibit with 12 full color reproductions of his paintings, photos of his life in Europe after the WW I, and black and white still shots taken from the 1933 classic film Insel der Damonen for which Spies did the casting and choreography.

The Bale Dao building to the west specializes in modern works, but my main interest was the marble-floored “treasure” room containing the museum’s private collection of prewar Dutch, German and Austrian artists who lived and worked on Bali. Here was the only Walter Spies painting on Bali, a haunting canvas of Calonarang; a charming Covarrubias of dancers putting on makeup, and a 1837 oil of a Javanese nobleman and his wife by the portraitist and landscape painter Raden Saleh, considered the father of Western-style Indonesian painting.

The Origins of the Piggy Bank

Guide to the Heroes Monument and Museum of November 10 Surabaya