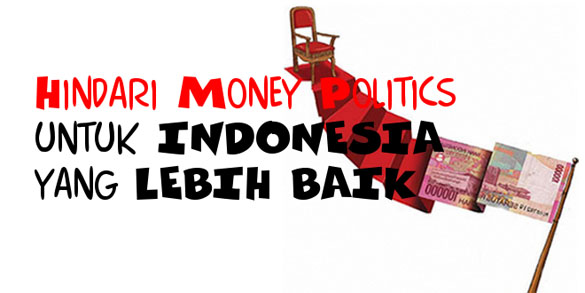 Vote buying is risky business, especially for candidates who fail to get elected and cannot repay their debts. Yet the biggest losers are Indonesian voters – if they allow their votes to be bought. Anyone who willingly votes for a crooked candidate has no grounds for complaining about corrupt politicians. One recent survey found that 40% of voters think it acceptable for parties to engage in vote buying.

In the aftermath of the April 9 general election, there have been countless reports of legislative candidates who tried to buy their way into power. Some scammers offer a winning number of votes for high prices.

One recent case to emerge involves Agustina Amprawati, better known as Tina, who stood unsuccessfully as a candidate for the Great Indonesia Movement Party (Gerindra) for the East Java Provincial House of Representatives. She had hoped to represent the province’s Electoral District II, covering Pasuruan and Probolinggo.

After her poor performance at the ballot box, she complained that she had given a total of Rp.116 million to officials of 13 District Election Commissions, in return for which they should have ensured her victory. She also claimed to have given a Honda Mega Pro motorbike to one official.

She said each district was supposed to provide her with 5,000 votes, giving her a total of 65,000 votes. To back up her claim, Tina has a letter of agreement, which is allegedly signed by 11 of the 13 officials and acknowledges payment of Rp.77.5 million in return for securing her election. “I’m not afraid of jail,” she said, “as long as I’m imprisoned in the same cell as them.”

The General Elections Supervisory Body (Bawaslu) responded to the scandal by recommending a recount at polling stations across the 13 districts – at a cost of Rp.2 billion. The General Elections Commission (KPU) decided no recount was necessary because the alleged bribes had not influenced the outcome.

KPU commissioner Ferry Kurnia Rizkiyansyah admitted that not all election officials had played by the rules. He said the 13 accused officials now face a criminal investigation and will not be involved in overseeing the July 9 presidential election.

Some candidates who cannot repay their debts end up getting psychiatric treatment. Others get arrested. On April 15, police in Riau province announced they had detained a Golkar Party candidate, Paruntungan Tambunan, for fraud – because he had failed to repay Rp.115 million, which he had borrowed in 2009.

In the North Sumatra capital of Medan, a demonstration was staged last week outside the local Gerindra office by people who claimed they were not paid promised funds after obtaining votes for the party’s candidate, Ajie H. Karim. Ajie has almost certainly been elected to parliament but the protestors said he should be sacked from the party for tarnishing its image.

Yakob Zukfahri, one of the protestors, said the campaigners were promised Rp.30,000 for each vote they could acquire for Ajie. Yakob said he had sold his boat for Rp.19 million to cover his expenses and now had nothing to show for it. A Gerindra official urged the group to be patient. Ajie has denied any wrongdoing, insisting that if there was any “assistance money”, it was merely for operational costs.

In Lampung province, the head of a local KPU office resigned after his driver admitted to opening a proxy bank account to deposit Rp.75 million in alleged bribes from legislative candidates.

Jakarta is reputed to be less prone to money politics on election days because it comes under greater media scrutiny. A friend of mine who was in charge of a polling station in South Jakarta said the day was generally smooth, although many voters knew nothing about the candidates, so a lot of men simply chose the most attractive women on the ballot sheet. He said the only drama occurred at the end of the day when a Gerindra candidate was furious to learn he had not been victorious.

Under the 2012 General Elections Law, anyone involved in vote buying or electoral fraud can face a maximum jail sentence of four years and a fine of up to Rp.48 million.