“It appears that each Balinese native, from the womb to the tomb is creative,” rhymed Noel Coward in his irreverent 1932 ditty to Charlie Chaplin, now cemented among Western notions of Bali as a community of artists.

Indonesian art critics, however, decry that Bali is trapped in rigid, fossilized traditions. That there is no meaningful development in Balinese art. But wait. What are we talking about? What is art, anyway? Allow me to illustrate by sharing stories behind two of Bali’s most-seen works of art. Children growing up in Bali before the 1990s would have encountered stories such as Gatotkaca’s final battle during the war at Kuru Setra, from the ancient epic Mahabharata, through shadow-puppet performances. Prior to the introduction of television, shadow-puppet performances were the cinemas of Bali, Java and beyond. Shadow-puppet masters wove the imagination of the people, interspersing moral codes embedded in the ancient epic with episodes of comic relief where characters from the epic discuss day-to-day village life, gossip, and most importantly, disseminate information to the populace.

Visitors arriving at Bali’s Ngurah Rai Airport are offered a scene from this story at the first traffic lights en route to the Ngurah Rai Bypass. The sculpture depicts Gatotkaca baring his chest defiantly, standing on the horses pulling Karna’s chariot. Horses, chariot, and warriors are larger than life, all displaying frenetic vitality and motion.

This modern concrete sculpture by I Wayan Winten from Teges, Peliatan, Ubud, depicts a crucial point in the war between the two branches of the Bharata clan. After ignoring provocation after provocation from their ogre-like Korawa cousins, the five virtuous Pandawa brothers reluctantly declare war. During the battle, the warrior Karna, duty-bound to serve the Korawa, wished to settle a personal score against Arjuna, the third Pandawa brother who was captain of their army. Karna had an invincible weapon he received as a boon from Surya, the sun god. The Pandawa knew that if he had the opportunity to use it against Arjuna, the death of Arjuna would break their spirit for battle. 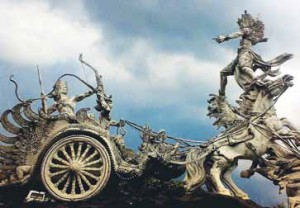 Krishna advised the Pandawa to sacrifice Gatotkaca, son of the goddess Arimbi with Bima, the second eldest of the Pandawa. With his powers of speedy flight, Gatotkaca could taunt and annoy Karna, avoiding Karna’s conventional sword, spear and arrows by fleeing into the clouds. It is a very frustrated Karna who sets loose his ultimate weapon, slaying Gatotkaca. And thus Gatotkaca saves his uncle Arjuna, who later avenges him.

During Soeharto’s New Order era, wayang shadow-puppet masters were ‘encouraged’ to focus on retelling the final chapter of the Mahabharata: After the war was over, when the king was just, and people lived in harmony, all content and prosperous. It was through such cultural tools that Soeharto maintained his iron grip over Indonesia from 1965 to 1998. Nevertheless, Bali has always enjoyed poetic license in following directives from Jakarta, and it was with an interpretive leap that this statue was commissioned in 1994.

Although the story is an amazing account of filial obedience (Gatotkaca was obeying the request of his father Bima), officially this sculpture is an homage to the sacrifices one makes for one’s nation, or ‘king and country’ if you like. In Balinese philosophy, parents, teachers, government and God are all respected as Catur Guru or the four teachers. Ostensibly, they know better, and we should respect and obey them.

A sculpture by the same artist at the location known as the “Dewa Ruci roundabout”, commissioned in 1996, depicts Bima slaying a sea-serpent. This story is not from the Indian Mahabharata, but from an ancient Javanese text which expands upon it. It tells of Bima’s odyssey in search of the elixir of life at the behest of his teacher Drona.

On a superficial reading, the story exemplifies the virtue of a good student’s obedience to his teacher. Powerful Bima is an honest, naive warrior with solid determination. He cannot be bought. He holds on tightly to his values.

The wicked Drona is in fact trying to find ways to kill Bima. Drona’s favourite students, the Korawa, wish to go to war with the Pandawa brothers, but they fear the mighty warrior Bima. Before they openly show their animosity against the Pandawa, they ask Drona to find ways to eliminate Bima from the equation. Drona tells Bima that in order to attain perfection and liberation, he must obtain the elixir of life.

Drona misdirects Bima to the tops of mountains, deep into forests and caves, and ultimately to the bottom of the South Seas. In the tradition of quests, Bima faces numerous powerful monsters at each place he is directed to. Bima’s might prevails. Not only does he vanquish the monsters, in defeating them Bima also breaks their curses to reveal them as divine beings once again, making allies out of them.

At the bottom of the South Seas, Bima vanquishes a mighty dragon. It is this scene that is depicted in the sculpture. Upon entering the domain of Dewa Ruci, however, Bima is rendered powerless and surrenders. He gladly accepts his fate, his impending end, knowing he has done his best. Dewa Ruci reveals himself and speaks to the warrior, giving him advice. “Don’t set out if you are not clear why you are going. Do not partake in food you have not yet tasted. Do not dress in unfamiliar garb when you know not their meaning. You can learn from asking questions…”

Later, Bima attains enlightenment by entering the ear of Dewa Ruci. The details of the story are full of symbolism. Officially, this sculpture is again a monument to filial piety, duty and obedience.

Next time your eyes rest upon these sculptures, provided you are not driving of course, ponder upon these stories. Perhaps you too, will discover new meanings.

Last Solar Eclipse of the Decade Passes Over Indonesia