Several publications, including The New York Times, ran pieces recently detailing the Jakarta phenomenon of young people congregating in local 7-Eleven’s. They cite fairly straightforward causes for the trend: inexpensive food, air conditioning, WiFi, and, most important, a physical space to gather in a city almost devoid of public spaces, save the malls. But there’s another hot party spot in Jakarta that’s remained unmentioned, and I’d like to add some nuance to the conversation by discussing it here: McDonald’s. 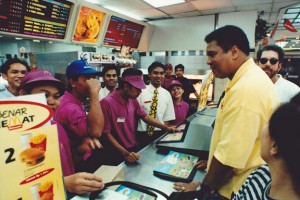 In my observation, the 7-Eleven parties usually begin in the evening as people leave work and school, and last until 10 or 11 PM. But McDonald’s occupies a more extreme niche of the Jakarta-native nightlife circuit. If 7-Eleven is the swanky cocktail lounge, McDonald’s is the rowdy after-hours party, hitting its peak at 2 or 3 AM on weekend nights. Of course, the drunken munchies—those beer-fuelled cravings for artery-clogging yumminess—are a universal phenomenon, but that’s not what’s happening here. Sure, people are eating, but looking around a local McDonald’s at 2:30 AM on a recent Saturday (the things I do for research), I couldn’t help noticing all of the untouched food on people’s trays. Also, nobody really seemed drunk. None of the girls had that partied-out look, the mussed hair, the smudged mascara, the glazed eyes; the young ladies at McDonald’s looked like they came straight from the salon. McDonald’s was clearly not their end-of-the-night-afterthought. No, McDonald’s was the ultimate destination.

On the chance that I’m over-thinking this, that throngs of people really are at McDonald’s in the middle of the night just because they like the food, let’s dive a little deeper into the idea of McDonald’s food products in Jakarta. First off, I have to establish an opinion that to me, and to others I’ve spoken with, seems so unequivocal as to be basically a fact. That is: Indonesian street food is way more delicious than McDonald’s food, and about 25% of the cost. That street food is right outside, steaming hot and ready to eat, which casts doubt on the idea that these people are at McDonald’s for nutritional sustenance.

Because I understand that it’s not fair to compare French fries to nasi goreng, let me make the juxtaposition more applicable by pointing out that Indonesian McDonald’s not only serves rice but also includes bubur ayam on the menu. So, in order to perform an A-to-A comparison, my boyfriend and I got an order of bubur ayam a few weeks ago, to see how it stood up against the bubur we’d had at various street vendors. I can unequivocally say that both my taste buds that night and my tummy the next morning agree that McDonald’s bubur ayam is crap. Experiment completed, I feel confident returning to my original hypothesis that price- and taste-wise, street food beats McDonald’s.

But of course, nobody at McDonald’s at 3 AM is ordering bubur ayam (except for the two Americans). Everyone is ordering fries and ice cream sundaes, much of which sits untouched. Which brings back the question, why McDonald’s?

The food is clearly a pretext for being in McDonald’s, which has somehow reached the status of “It” spot. Perhaps the reason for its “It”-ness can best be explained through an analogy. On another 3 AM McDonald’s visit (I work very hard for my stories), the restaurant was crammed with young people watching the France v. Spain Eurocup game, projected on a large screen. Everybody was rooting for Spain. Perplexed as to why so many Indonesians seemed so rapt by this far-away game between foreign countries, I tapped the shoulder of a young man nearby and asked, “Excuse me, do you know why everyone cares about this game?”

He shrugged: “Soccer is the most popular sport.”

“Oh,” I replied. “And do you know why everyone is rooting for Spain?”

“Spain is a very popular team.” 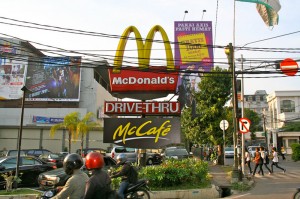 Okay, another complication. If the phenomenon of McDonald’s derives from its stature as an “It” spot at which to see and be seen, then how do you explain the following: getting a haircut at a swanky-pants salon, filled with dolled-up women getting coloured and blow-dried and manicured, I noticed one impeccably-dressed lady at the central table, doing something I couldn’t imagine a woman in a New York or San Francisco salon doing: devouring a large order of McDonald’s fries and chicken wings. She wasn’t patronizing McDonald’s in order to be seen at the hot spot; no, she’d gotten her food to go, and was eating it elsewhere.

An answer might be that the cachet of McDonald’s exists in various forms, one of which is physically being there, showing that you know the right place to be; and another of which is just eating McDonald’s in public, kind of like re-using your Marc Jacobs’ shopping bag to hold your lunch or your gym shoes—a mobile advertisement of your savvy.

But there’s one final piece of the puzzle that I can’t reconcile. Here in Jakarta, we are blessed with the luxury of McDonald’s delivery. And, based on the number of McDonald’s-delivery motorbikes I see puttering through neighbourhoods, it’s used frequently. I could try to argue that people order McDonald’s delivery on the off chance that someone sees the delivery motorbike pull up to their house, but even I know that’s a stretch.

I don’t think any amount of intellectualizing or rhetoric can get me around one very simple fact, a fact that I implicitly acknowledged and validated when I ordered McDonald’s delivery a few weeks ago (my quest for journalistic excellence knows no bounds) and happily gobbled up the salty, greasy, paper-wrapped delights that arrived. That fact is this: McDonald’s tastes pretty damn good.