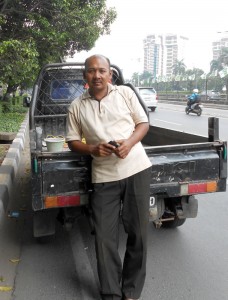 No one is happier to see school let out for summer than Iman. He may be 42, and well out of school, but the summer break means more to him than we really know.

While plenty of parents are happy to see their children stress-free without the worry of exams weighing them down, Iman, who has been driving a truck and picking up odd jobs for the last 20 years, is just happy to be able to drive around the city and not worry about kids jumping in the back of his truck for a free ride.

You’d think guys like Iman, whose lives we thought would be turned upside down by the rising price in gas, are actually just happy not to have to worry about crazy kids jumping on the back of his truck.

We don’t really think about it, but no one dreads stoplights like a truck driver. Every time Iman sees a light turn from green to red he has to look over his shoulder for naughty kids looking for a free ride.

I asked Iman if the rising gas prices would be a big problem to him, but much like everyone else, he has taken it all in stride. Plus, the price has nothing to do with him. He simply passes it on to the consumer. While before the rise in price everyone was worried about the “little guy”, the reality was that drivers-for-hire have bigger things to worry about—like finding the next job or avoiding having to pay off the police with uang damai (peace money).

Iman was parked along GatotSubroto, one of the busiest roads in Jakarta. He was sitting in the shade enjoying a break from the hot afternoon sun. He parked his truck wherever he wanted.

“Traffic is traffic,” he said. “If I am getting in the way and I really need to move my truck I will, but right now I am not causing a problem and the truck is fine here on the road. If the police come along and ask me to move it I will. Otherwise, I’ll leave it here until I feel like leaving.”

And if you ask Iman how much a litre of gas costs now he scratches his head. He’d rather talk about how much it costs to park in one of the buildings along GatotSubroto.

While everyone is worried about getting trucks like Iman’s off the road, freeing up lanes for traffic, the most important thing for him is making sure the truck is there, front and centre, so he can keep an eye on it.

Ship Captain and Crew Under Investigation for Illegal Transport of Workers