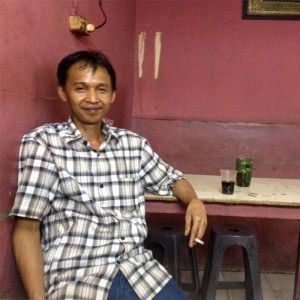 The ash on Laiman’s cigarette curls and turns grey like a witch’s fingernail. It finally falls on his pants. He sweeps off most of it, but there is a smear of charcoal he only looks at before speaking.

“When I heard that seven out of ten Indonesian men smoke it didn’t bother me,” he says taking another drag off his clove cigarette before blowing smoke toward the wheezing ceiling fan. “I actually thought the number was higher. It is in our culture. The same way we drink coffee or tea.”

Laiman is slouching atop a plastic stool inside a low-ceiling room in the shadow of the BNI building along Sudirman.

He has worked in Padang restaurants all his life. Almost as long has he has been smoking. In the window sits a treasure trove of Indonesian dishes. In the back room a TV blares a Bollywood flick from a decade ago. There are bags of rice in the corner. A cockroach scurries in broad daylight. He doesn’t flinch.

It’s four in the afternoon in the tiny Padang restaurant. Most of the stacked plates in the window are empty. The lunch rush usually leaves Laiman with little to do in the afternoon. He smokes. He jokes with the coconut salesman he can wave at and watches husk in the afternoon. The mosque calls fill the alleyway with sound.

Recently, Indonesians have cut down on smoking. There are a number of billboards around Jakarta, and the malls – where everyone spends their time – have become smoke-free. But not on the side streets, where there are more wooden benches than there are mall walkers. Outside of the mall scene there is a different way of life. One that prides itself on the freedom that come along with not being privy to the latest fashions or trying the trendy soft pretzel stands.

Laiman loves it. “This is the real Jakarta,” he says. “This is the city. Look at where we are. There are buildings everywhere. But here is where the heart of the city is. Here with all the people going this way and that.”

He’s right. He is in the thick of it. There are new buildings going up every day around him. Is he worried? Not in the least bit.

“I try not to think about it. It makes my head hurt,” he says. “I’m not scared of progress. We adapt. That’s what we do in Jakarta. That is what we are good at. If it floods, we adapt. If big buildings come in and construction starts, we figure it out. Jakartans are good at adapting, it’s what we do.”

Laiman’s outlook is a good one. Maybe his ‘roll with the punches’ attitude is something we should all think about adapting. Maybe his idea of a good way to spend the day, smoking cigarettes, drinking coffee and chatting with his friends, is all something we envy.

Think about it. How many emails do you think Laiman sends a day? How many e-mails is he CC’d on?