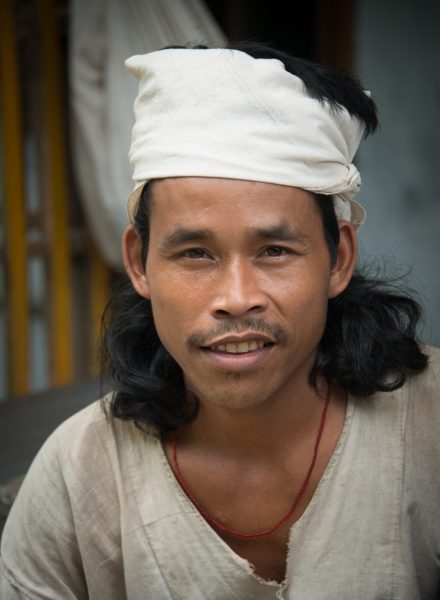 I met Herman on a recent trip to the Kendang Mountains in the province of Banten, 167 km from Jakarta. Herman is a Baduy Dalam tribesman, who adheres to a traditional way of life and must follow village customs and laws, which do not embrace any modern living practices.

The Baduy Dalam do not use electricity, they have no schools, and it is forbidden for them to use transport with a motor or a wheel.  They are not even included in the Indonesian census.

To learn about the ‘inner’ Baduy ways, it is possible to take a trekking trip and stay in the ‘outer’ Baduy village. By using porters, like Herman, I was able to learn about the culture and the local ways. His people have pursued a subsistence agricultural lifestyle, largely unchanged, for thousands of years.

It is one of the most interesting places I have visited in all my travels across Indonesia. The inner Baduy adhere to their age-old beliefs and religion and follow their mystical leaders, the Pu’un, who are not allowed to leave the inner village. They follow a religious belief known as Sunda Wiwitan and honour a supreme deity. Old Sundanese language is used in their  prayers and rituals.

It’s easy to recognize a Baduy Dalam (also known as White Baduy), as they wear white head cloths and they carry a large white cloth bag called a gendongan.

In Jakarta it is possible to see a group of Baduy walking along the railway tracks or on one of the main roads leading into Jakarta’s CDB. In fact, a group of Baduy made the front page of The Jakarta Post a few months back.

Herman told me, “It takes me three days to reach Jakarta from my village. It’s 167kms. I must go by foot. I am not allowed to wear shoes.” He continued, “I have taken the journey to Jakarta over fifty times now. I know the way by heart. I cross two mountain ranges and then follow the railway tracks all the way to Lebak Bulus. I stay with my friends in Jakarta and I sell my handicrafts along the way.”

I was fascinated with Herman’s feet. His leathery-looking feet supported wide, almost webbed toes. This ‘barefoot policy’ for the inner Baduy people includes other hardships, such as their life of hard physical labour in the fields. They are not allowed to use any modern farm equipment.

Staying in the mountains with the Baduy people gave me the opportunity to bow out of contemporary life as we know it, with all its modern conveniences, and blend in, albeit for just a weekend, to a simple, peaceful, gentle way of life.

Being guided through the outer Baduy village by a team of inner Baduy was for me a real honour. We walked along the many paths that linked small weaving villages and farming hamlets. Through my guide, Kelik, I heard stories of wedding ceremonies, baby rituals, hunting practices, rice harvest festivities and some village taboos.

My overnight stop was in a small kampung called Gajeboh, and after a lovely meal, cooked over an open fire, I slept peacefully in the mountains, listening to the slow running river and the gentle sounds of nature.

I was awoken early in the morning with the rhythmic clack-clack-clack of a wooden loom, as the grandmother of the house wove her threads and sung an ancient tune.

Trekking through the Baduy villages, you seem to glide on a slipstream of serenity. There is almost no sound coming from the trees and kampungs, which are devoid of TV and radio, and this peace follows you along the pathways to another world.