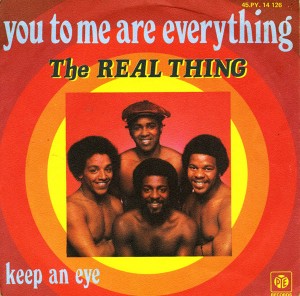 In 1995 I was the tour promoter for the Philippines leg of the Asian tour of the British band The Real Thing. In the 70s they were famous for one major hit called You to me are everything and a few lesser hits, but You to me was big enough to carry them through Asia on a reunion tour that took in ten cities. The venues could not be huge but there was money to be made because they were nowhere near as expensive as they would have been 20 years earlier.

I set the gig up at a small venue in the centre of the city on the end of Makati Avenue and went to work selling tickets. The response was good and we were almost sold out on the day of the show so I was quite confident we would be full by the time the evening came. The band were arriving the day of the show from Singapore and timing was tight but with a fair wind and a bit of luck with the Manila traffic they would arrive with time to spare for the sound check, a snooze and a quick beer before the show started at 9pm. At 5pm I was pacing the floor suffering minor chest pains and wondering where the hell they were. There were no mobile phones around to provide blow by blow accounts of their progress.

At 6pm the band arrived and I was relieved to see Chris and Eddy Amoo get out of the car, but they didn’t look at all happy. Eddy spoke, “We’ve lost a guitarist mate.” (Yes, they are British.) I looked at him in bewilderment. How can you lose a guitarist?

It turned out that the guitarist had arrived with five months and 28 days validity on his passport and the Philippines immigration regulations required six months after the date of arrival. Somebody was looking for a bonus. I cursed for a solid five minutes and considered all the obvious possible solutions but they couldn’t play without him, they had no backing track they could use and a local guitarist could not fill in no matter how good they were. It was back to springing the guitarist out of the airport.

I found a phone in the venue office and started calling friends to see if anybody knew a senior immigration officer. After a couple of calls I found out that an American friend of mine knew somebody. He said he would call him and call me back. Twenty long minutes later the phone rang and I snatched the receiver from its base. His contact could help us out but he wanted a thousand dollars to make it happen and ten free seats at the show. With no other options I agreed and I left it with him to sort out while I got the rest of the band on stage for a sound check. (I was lucky enough to sing You to me are everything with them at that sound check – my minor claim to fame!) We set up the guitarist’s gear (except his guitar which he was carrying) and hoped for the best.

At ten minutes to nine the venue was full and I was frantic. There was no sign of the guitarist and no word from my friend the fixer. Chris and Eddy Amoo are lovely guys but they were starting to get a little nervous. We could delay the show for 20 minutes maximum or maybe stretch it to 30 minutes but it would be pushing it – this was a Wednesday night and people had work in the morning.

At ten minutes past nine the doors sprang open and the guitarist came bustling through the door with an escort of tem immigration officers and two policemen. We rushed him to the stage where the rest of the band was waiting and plugged him in, then the drummer shouted, “One, two, three, four!” and the band burst into their biggest hit without a hitch and without missing a beat. Real pros. Nobody in the audience was any the wiser. I downed a long cold beer in one gulp and enjoyed a great show by one of my favourite childhood bands. The show must always go on!