One of the things standing in the way between an idea and its realization is resources. As a nation, Indonesia has an impressive range of resources, be it natural, social and even monetary. What we might be lacking is the connectedness of resources to produce something great. Without connectivity, our individual resources are limited to merely the people who know where to go and what to do about it.

In this Internet era, the word ‘connect’ is taken to a whole new level. The Internet connects not only people but their resources and their potentials to make something great — together! Now isn’t that the spirit of the country — gotong royong?

Think of the last event you went to; that two or three-hour event probably took months of planning, people donating their brainpower, and multiple other factors to execute. When a project or event is well organized, carefully thoughtout and strategically planned, then you really only need one more piece of resource: money. Waiting around for an anonymous donator to fall out of the sky, while clinging to all hope on the concept of ‘build it, and they will come’, can only go so far; there must be another way to fly in some funds for a project.

The good people of Kita Bisa are aware of this predicament. Instead of depending on a single donator, Kita Bisa utilizes the power of mass appeal; they connect the needs of a project to the whole of Indonesia’s (and the world’s) resources. Kita Bisa bridges the resources of many to support the creation and innovation of projects in Indonesia.

Kita Bisa is an online crowd-funding platform that serves as an information hub for ongoing projects in Indonesia, as well as a vessel through which the practical opportunity to donate money for said project is available. The website is accessible from practically anywhere in the world and uses payment methods such as Paypal and credit card transactions.

Following the success of similar online crowd-funding platforms in the USA such as Kickstarter, Kita Bisa works to replicate the effect in Indonesia, catering to projects in need of financial support in the humanity, social and environmental sector. The initial idea of creating Kita Bisa came from Alfatih Timur (Timmy) during his last year as a student at University of Indonesia in 2012. The website launched on 6 July 2013, following the support of Timmy’s mentor, Professor Rhenald Kasali. 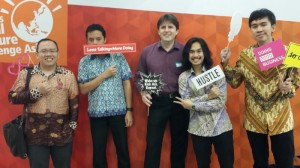 Kita Bisa’s first project was one of its most successful to date; the #savemaster project. The word ‘master’ is short for Masjid Terminal, which is what a particular Jakarta school for marginalized children was called, for its location was near a mosque and a train station. The school was in danger of being relocated by the government. A couple of students from University of Indonesia who were concerned with this news set up a petition on change.org to overturnthe government’s decision on relocating the precious school and partnered up with Kita Bisa for a fundraising campaign through its website www.kitabisa.co.id. The result was a staggering US$12,000, which helped the school to remain at its original location and to improve its facilities.

The Kita Bisa machine is powered by people who keep projects such as these close to heart. They identify themselves as the ‘doers’ in the Kita Bisa system. As one of the doers, Vikra Ijas, who is mainly in charge of marketing and partnerships, said about the platform, “I am convinced that Kitabisa is something that will be a game-changer, and there is an inherent need for it in a developing nation like Indonesia. In short, it’s about putting the ‘power’ back to the people to decide what and who should get funded.” The website’s layout is fun and exciting, and very much stimulates the spirit of giving. The design is crafted by Kita Bisa’s partner, Fajrin Rasyid and his superb team from Suit Media.

Like other crowd-funding websites, Kita Bisa’s revenue comes from a small percentage of the funds coming in for a project. These impactful projects have funding goals that range from a couple of million Rupiah to hundreds of millions of Rupiah. To successfully fund a project through crowd-funding platforms such as this, cooperation from project managers to promote and disseminate their fundraising campaign is a crucial aspect in order to successfully reach their funding goals. “It comes down to educating users and project owners on how to utilize the platform and get the most out of crowd funding. Because when we all make a collaborative effort, we can achieve things beyond our imagination,” explained Vikra.

Donators are rewarded not only by the sheer joy of helping a project in need, some projects give fun and creative compensative perks, such as merchandise, opportunities to meet or dine with influential figures, or tickets to the project’s events. All of the perks are typically tailored to the amount of funds donated.

Kita Bisa is transitioning to its 2.0 site, scheduled to be launched on 1 September 2014. Coupled with this exciting new version, Kita Bisa has many projects in line to partner with, such as a youth leadership event that will feature Muhammad Yunus, a local startup business that processes kain perca (shredded/used fabric) into cool new products, and their biggest campaign yet, which is to raise funds for a blood donor mobile unit, in collaboration with the Indonesian Red Cross.

Kita Bisa, or literally ‘We Can’ in English, is a slogan that in itself promotes a spirited can-do attitude — a collective effort. The efforts of many could move mountains; mountains that may be hard to climb when you’re by your lonesome self. Together, it’s a piece of cake of a climb. Kita Bisa!

Visit the website www.kitabisa.co.id and see the success stories for yourself — how projects and ideas turn into a reality. Your project could be one of them!