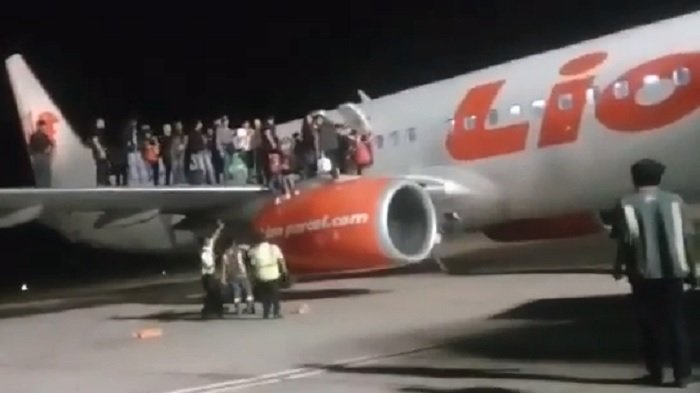 At least 10 passengers on a flight preparing to take off from Borneo island were injured, most of them with broken bones and head wounds, after panic ensued when a man claimed there was a bomb on board, Indonesian police said Tuesday.

Passengers overheard the 26-year-old man, Frantinus Nirigi, telling a flight attendant there was a bomb on the Lion Air Boeing 737, which was to carry 189 passengers to Jakarta on Monday night, said West Kalimantan police spokesman Nanang Purnomo. An eventual inspection of the plane found no explosives.

After Nirigi made the bomb claim, another passenger broke open the emergency exits, enabling panicked passengers to flee the aircraft, Purnomo said. He and Nirigi were both arrested.

This video posted online showed dozens of people standing on the plane’s right wing. Some slid down the right engine and landed on the tarmac.

#BREAKINGNEWS
passenger plane out of cabin because there is a saying in the plane there is a bomb, this happened in #pontianak int airport #indonesia with lion air plane.
Very dangerous way of Escape ? pic.twitter.com/xgM7DKKQUK

Purnomo said eight passengers were hospitalised with broken bones and head wounds, while two others had minor injuries. Police did not provide details on how the passengers were injured.

No suspicious items were found after a thorough inspection of the plane by police and security personnel at Supadio airport in Pontianak city. The flight departed for Jakarta after a three-hour delay, said Lukman Nurjaman, Lion Air’s district manager in Pontianak.

The incident is the latest bomb hoax on flights in Indonesia. On Sunday, Lion Air removed a 25-year-old passenger from a flight departing from Jakarta bound for Malaysia after he joked about the presence of a bomb on board. Indonesian flag carrier Garuda delayed a flight in March after a passenger claimed he was carrying a bomb.