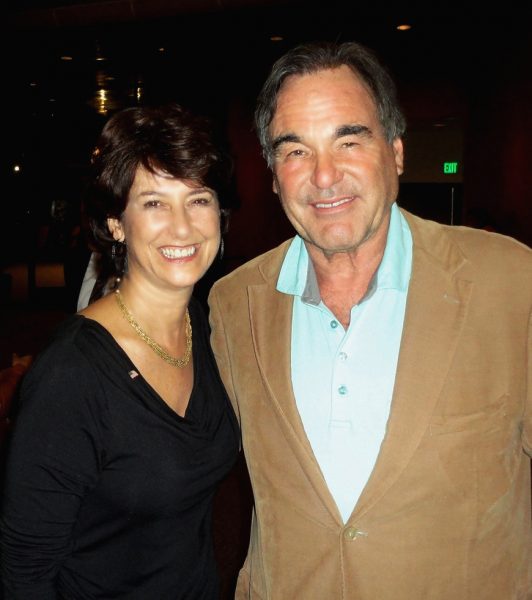 Deborah Gabinetti with Oliver Stones at the Film Premiere of SAVAGES.

Originally from Springfield, Massachusetts, Deborah is the founder of the Bali Film Centre, an international film promotion board to ensure foreign production companies receive professional assistance and information when filming in Bali or anywhere in Indonesia. Ms. Gabinetti is on the Board of Directors of the Asian Film Commission and started the Bali International Film Festival (also known as BALINALE).

You have over 20 years of experience in the film industry. Tell me about your experience prior to coming here.

I have been a member of the Screen Actors Guild since 1977, but after years of auditioning and only getting work in a couple of commercials and feature films, I quickly realized I was much better at recognizing talent than being one, so I started working at a leading modelling agency and then opened my own NYC casting agency focusing on children.

When did you make your first trip to Indonesia?

1992. I didn’t have a clue where Indonesia was until a New York director friend of mine asked if I would be interested in coming to Jakarta to work on a couple of productions. Commercial television was just opening up here and he was having difficulty with the talent; finding people to cast, being prepared and showing up on time.

I was overwhelmed by Jakarta. Although I had come from a big city, the smells, the sounds and the people were all so foreign to me, every day was such a challenge. After several months of helping on a few productions, I returned to NYC. But something about Indonesia and the people fascinated me and I felt that one day I would return, which I did in 1995.

I lived in Jakarta for several years, working as a casting director and producer of children’s programmes, commercials and corporate videos. During that time, I had the opportunity to work alongside major networks (CNN, ESPN, Discovery, TNT Cartoon Network, HBO) with the newly launched Indovision, but moved to Bali soon after due to the Asian financial crisis and the lack of projects being developed in the capital.

When did the Bali Film Centre come into existence?

Bali has a long history of attracting filmmakers and was the setting for the last silent film ever produced in Hollywood, Legong: Dance of the Virgins, released in 1935 by Paramount International, directed by Henri de La Falaise and produced by his wife actress Constance Bennett and starring an ‘all native cast’.

Since then, there were so many foreign crews coming to film in the country, particularly in Bali, but there was no office to provide any assistance or support. The centre was just a natural fit and in 2002 I presented the idea to the Bali Governor to establish a film promotion office. Two years later, the Minister of Culture & Tourism, Bapak Ardika, gave us his endorsement to represent all of Indonesia.

Our main aim is to persuade more foreign filmmakers to utilize Indonesian locations, story ideas and its talented creative people. It’s proven that higher visibility of a country in film or television can create a positive global image, help boost tourism potential, generate revenue and jobs and contribute to the growth of its domestic film industry.

You also created the Bali International Film Festival (also known as BALINALE). When was that opened and what are you planning for the festival this year?

Christine Hakim (award winning filmmaker and UNESCO Goodwill Ambassador for Teacher Education in Southeast Asia) and I founded the Bali Taksu Indonesia Foundation in 2007. The foundation’s philosophy is that the sharing of knowledge through arts and culture builds understanding. Film has the power through sight and sound to transport people to places, and induce visits to foreign lands enabling greater tolerance and acceptance of countries and cultures.

The foundation established the Bali International Film Festival, BALINALE, as a way of supporting established and aspiring local filmmakers, discovering new talent, and providing a platform for international industry professionals to screen their films to a potentially huge market while exploring potential film projects to be set here. Now in its eighth year, BALINALE will be held at Beachwalk Mall, Kuta Beach, Bali from 12-18 October.

What are the greatest challenges filming in Bali and Indonesia?

Incentives, film funds and grants are all major factors when a studio or production company decides where to film. In Indonesia, there are no official government incentives in place and it does not honour ATA Carnet for temporary importation, making it difficult when budgeting. However, the government is very supportive of the film industry and does provide support on a project-by-project basis. The related ministries are currently discussing strategies to further develop the country’s appeal to filmmakers.

What film shot here in Bali was the most interesting to work on?

We are extremely proud to have been a part of Sony Pictures’ Eat Pray Love. When I learned that Plan B Entertainment had bought the rights to Elizabeth Gilbert’s book, I flew to LA to meet the producers personally. I felt it was crucial to get them to experience Bali first-hand, so invited them to the BALINALE where they would have an opportunity to see Indonesian movies and meet talented local filmmakers to prove that there was a viable industry that could offer the required support.

What’s the funniest on-set situation you have experienced?

Well, the director wouldn’t call it funny because we lost the shot, and it was a very silly mistake on my part, but we were filming a scene from the highly popular Korean series An Occurrence in Bali for Seoul Broadcasting System (SBS) at Uluwatu Temple, when a monkey jumped on my back and yanked out my earring. The lead actress was so terrified that they had to postpone filming, not to mention that I lost my diamond stud!

How do you see the future impact of film in Indonesia?

Due to the success of these past projects, Indonesia is now firmly on the film location map. Indonesia, in general, has such a wealth of untapped resources, hidden filming locations, rich story ideas and a talented pool of creative individuals. Being so vast and geographically and culturally diverse means that there is very little visual background that cannot be provided for any action or era from colonial buildings to deserted pink sand beaches, tropical rainforests and tribal villages.

In order to meet the growing needs of an industry that is now more creatively diverse and technically skilled, we are expanding our capabilities and services with plans in place to support the industry through training and workshops, and build a studio facility and international film training centre to accommodate the increased interest in Indonesia as a filming destination.