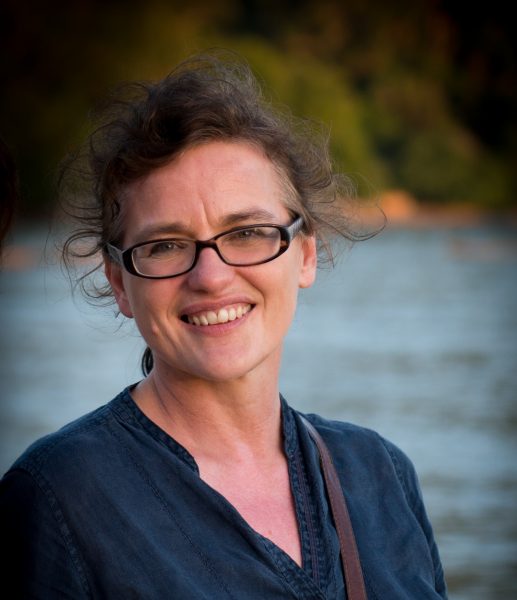 How long have you been living in Indonesia?

I first came to Indonesia in 1968 and I grew up here. I was a JIS student. I went back to the UK for 20 years, went to University and got married, but the whole time I was in the UK, I missed Indonesia. I would go back and do consultancy work on forest, climate and community empowerment and then finally I had a big life change in 2003, allowing me to return to Indonesia.

Did you always love Kalimantan?

The first time I went to Kalimantan in the late ‘80s I didn’t like it! I was raised in Java, which was all about the rice fields, mountains, refinement and beauty, and the first time I went to Kalimantan, it was hot and there was nothing there. I hadn’t gone to the forest yet – I was just in Palangkaraya – and I thought, there’s nothing here! I had a friend working on a development project, which I got involved in and I started to enjoy the Dayaks and their way of life more and more.

Tell us about ‘bottom-up planning’ and how you brought it to Kalimantan?

I was working with the local communities so that they could identify what their needs were and then articulate that to government authorities enabling them to listen to the community. What often happens is the Government sends out trees to villages to plant which are not suitable for the area – not understanding the real needs of the local people. We turned it round so the local people began to identify what it was they needed to progress and articulate this. This was the start of bottom-up planning in Kalimantan.

You previously worked with the World Bank on the Program Nasional Pemberdayaan Masyarakat Mandiri Perdesaan. Tell us about this project.

This was one of their incredibly successful programmes. I helped with designing some of the training programmes that would train facilitators so that they would know how to facilitate working with the community to really begin to identify the needs and how to train community people to be able to voice those needs. It was a very exciting time because there was lots of change going on.

What is social entrepreneurship?

It’s like creating enterprise, but what’s really important is that the bottom line is people and the environment, then profits.

Not that profit is what drives everything. A social enterprise needs to be profitable, but not at the expense of the community or the environment. I became interested at how business could become a driver of change instead of the big baddie.

How and why did you start your company, Kalimantan Tour Destinations (KTD)?

With my partner Gaye Thavisin, we entered a competition in the Netherlands in 2006 called Business in Development Challenge, with over 1,600 participants worldwide, and we were one of the winners! We won some money, which was enough to set up our company, and I strongly believe it was the business plan that we created during this competition that prepared us for everything we experienced while setting up and running the company.

The whole idea was that we would have a river cruise for guests to experience the wonderful culture and nature that Central Kalimantan has to offer. We work with local communities to ask them what they would do to host guests at their village and how they would like to do that.

What changes in the area have you noticed through your social enterprise?

Sangar, which are the local dance groups, were dying off as tradition started to fade, but we were able to get young kids relearning the dances, as they are performed for our guests on every trip.

The bone houses also started to be preserved as we pay a fee to families who keep them. We use canoes from the local villagers, renting directly from them rather than buying our own. The villagers were able to make money directly from our business and every year we negotiate new prices with them, so there is never any haggling.

What is the most important message you try to convey to the Government through KTD?

People come to Kalimantan to see nature, which is becoming harder and harder to find in the world. Palangkaraya is so accessible and we tell the Government that they have such an asset if they keep the forest intact.

What factors are you seeing influence the dying off of Dayak traditions and beliefs?

The idea of getting to a Dayak heaven is really expensive, as seen in their extravagant funeral ceremonies, whereas a Muslim or a Christian heaven is much cheaper, which has led to the culture disappearing.

In your experience, what happens when the Dayak people are given ownership of forestland in Kalimantan?

It depends in which area. In the part of Kalimantan that we were in, close to the city, a lot of the talk was that if we give the rights to the Dayaks to be the caretakers of the land, they will look after it, but actually what was happening was that once they got rights to the forest, they were looking for buyers to sell the land and make money. That kind of sense of looking after the land has been eroded. The Dayaks would say, “Since the 1970s, outsiders have come in and taken everything from our land, and we have just stood by. If we don’t take something, then we’re not going to get anything.”

When I was with Indonesian Forest and Climate Strategy (IFACS) with US Aid as Kalimantan Advisor, I was taken to West Kalimantan, where the outlook was really quite different. In Gunung Palung, wanting to look after the land and the jungle was still very much a part of their culture and they had very sustainable farming ways.

Is President Jokowi doing anything to protect the forests of Indonesia?

Jokowi has announced the Merauke Integrated Food & Energy Estate (MIFEE), where he wants 1.2 million hectares of rice fields developed within three years. He’s not looking at the suitability of land, which most experts say will be just like the Mega Rice Project, Suharto’s failed project in Kalimantan, where 1 million hectares of peatland were cleared to make way for rice, which was unable to grow in the region. A weak leader thinks that if he makes decisions like this, it makes him sound strong and proactive, where actually it’s likely going to be a huge disaster.

What does the future have in store for you?

I would like to pass on to others how to create a future through enterprise. You can be in control through business planning and looking at the resources available to you, providing good customer service – that’s what I like to spread to others. I want people to understand that through having a clear vision and an awareness of who’s there to help will make things better.

Thank you, Lorna. To get in touch, email [email protected]