The sound of the referee’s whistle pierces the humid afternoon. Players bolt into action vying for the soccer ball. There is a solid thud as a player’s cleat makes contact with the ball. The ball sails across the green field and is trapped by an oncoming player. In a shuffle of feet from the opposition, a minor battle ensues. A quick fake to the right produces a victory on the field, as the player maintains possession of the ball and sends it into the net. Score!

This may seem like a typical scene on any football field in Jakarta, but for the Jakarta Football Association, it is actually quite new. You see, the players on the field aren’t boys, they’re girls. 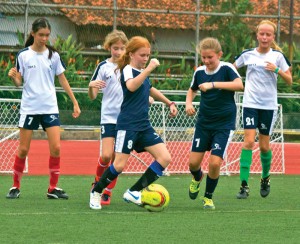 The Jakarta Football Association (otherwise known as the Coca-Cola League) has been the premier private football association in Jakarta since 2005. During the first year, the league boasted 12 schools and 36 teams. Those numbers have grown to a staggering 60 schools and 209 teams in 2013. But the most exciting addition to the association? The inclusion of girls.

The inclusion of girls is positive for many reasons. Nora Trapp, a freshman at Jakarta International School, explains some of the benefits, “Since there aren’t a lot of opportunities for girls to play soccer, having girls join the Coca-Cola League gives girls from all over Jakarta more chances to compete. It’s also a great way to meet and interact with new people.” Indeed, before the Coca-Cola League included girls, the opportunities to play in Jakarta were limited to school teams (many of which have a short season) and co-ed teams with Jakarta Youth Soccer. 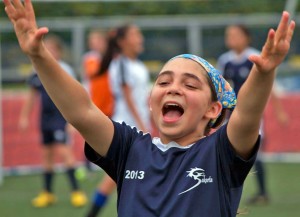 When asked about his experience coaching a girls’ team, Neil Prendergast responded, “Coaching 10 and 11 year old girls is brilliant. They are young enough to still be soaking up all the guidance and advice, yet also mature enough to accept that guidance and properly apply it.”

On May 4th the league will host their final soccer Gala. The BIS auditorium will be packed full of players, coaches, and cheering fans. The highlight of the evening will be when each winning team comes up on the stage and receives their awards. Joining them on the stage for the second year in a row, will be the girls’ teams.

When asked what it feels like to join the boys on the stage, 13 year-old Madilyn Abbe said, “It’s about time!”

And to that I can only add a huge thanks to the Jakarta Football Association and a very enthusiastic “Amen, sister!”