I must be honest and say that when I was first told about pétanque in Jakarta my initial reaction was ‘what?’ and ‘what?’ It may lack the appeal and profile of football or rugby, for example, but that does not mean the game lacks enthusiasts. Indeed, since I first discovered pétanque a couple of years back it seems to be growing.

For the uninitiated, pétanque is a form of bowls that originated in the South of France over a century ago. The word itself will delight cunning linguists; it comes from the Occitan language to be found in France and Spain along the Mediterranean coast.

Pétanque basically means ‘feet anchored’ and refers to one of the rules of the game.

Playing the game does not need the manicured lawns of the better-known bowls. A hard surface will suffice. You also don’t need a whole heap of expensive equipment to play the game or to impress your friends. Just some boules and a jack.

Games can be played either individually, one versus one, or in teams such as two-on-two or three-on-three, and starts when a players tosses the jack. Players then toss their boules as close as possible to the jack and the winner is the team, or individual, with the most boules closest to the jack.

Sounds simple enough, but I must admit on my visits to watch them play I couldn’t make heads nor tail of what was going on, although some of the poses made by the players as they tossed their boules were pretty impressive.

Obviously there is a bit more to the game than that. Like many games there are skills and complexities to be mastered before a player can make strides. 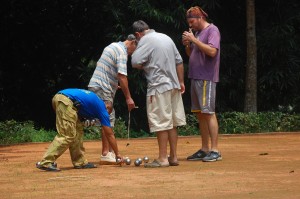 With interest piqued, what of the pétanque scene in Jakarta? Well, a group of aficionados from nations such as France, Australia and Indonesia have been meeting every Sunday morning since 2002, come rain or shine, at about 9am in Ragunan, South Jakarta to hone their skills and perhaps even partake in a quiet beer or two in the shade.

While they were the first group, other clubs have since been formed and now enthusiasts gather together their boules in Lebak Bulus, BSD City and Jakarta State University in Rawamangun. There is also a small group of keen players in Palembang, South Sumatra who frequently head to the capital for major events.

And the number of events is also on the rise. May, for example, sees the first ever Jakarta Pétanque Open featuring local teams as well as, it is hoped, teams from overseas. The JPO will take place at Taman Giri Loka in BSD City 22-24 May and promises to be a good introduction to the sport.

A more established annual event is La Javanaise, an open event for teams of three, triples to use the lingo, which was first held in 2012. Cedric Vernet, a keen pétanque player, told me the 2014 edition proved to be very popular with players travelling from far and wide.

“The competition went well. We had 20 teams (60 players); players from Jakarta Pétanque Club (JPC), UNJ (University Negara Jakarta), BSD Pétanque Club, Federasi Olahraga Pétanque Indonesia (FOPI), from Jogjakarta too, from the main sponsor Crown but it was the team from Palembang who won,” Cedric explained.

So, if you are too old for rugby or football, and golf involves too much walking but you are still in need of a sporting, social fix at the weekends then why not give pétanque a go?

They always welcome new players so check out their website www.jakartapétanque.com and drop them a line. Cedric would be only too happy to hear from you!

Surfing In The Rain