Children learn words and meanings first, but quickly want to express themselves in the things that they do in their own writing. Yet one in four children at age 11 cannot do this satisfactorily.

The article looks at some simple ways to turn your son or daughter into a famous writer by using the concepts used to make great books, plays, poems, songs and films – start with a great idea and develop the story using story boards to sequence the story in discrete steps or stages.

The best writers of old used the same hooks in their writing that the best writers still use today. We call it a storyline. It can be a true story or fiction. But it must be well written and novel, even where it builds upon an old recipe.

The best recipes are love stories, dramatic events like wars and disasters, and, for kids, fantasies. The best of each genre has tragedy or comedy, sometimes both, such as in Shakespeare, as the central mechanism for telling the story.

So how do we learn to write well from childhood? Easy. Practice, practice practice – and most importantly, find yourself a good coach because the mechanics of writing in an interesting style comes by passing your work through an experienced eye and ear. Listening to your work being torn apart by a critic is the bane of the writing profession. So best employ your own critic in-house from the start – be it an older sibling or parent. They will help you to work through your main idea and provide a critical eye to test out that which works and does not. Reworking the idea, then the text – again and again is the answer for most good writers who get published, which is often the pinnacle for many writers. Making money, let alone a living, from your writing is not even a dream for the majority.

Not only should what you write read well, it’s best if it also sounds good to listen to – thereby making the transition from the page to play and screen easier to do.

Ancient Greek writers had to contend with their plays being performed in amphitheatres set in the countryside or in towns with townsfolk distracting the wandering eye. The best Greek writers were also philosophers who could wax lyrical about almost any subject of interest to the common man, who himself was most commonly illiterate.

After the Romans conquered Greece, their writers reworked mostly the same classical Greek stories and switched them around somewhat to reflect the power and scheming of the Roman hoi polloi – the high people – the Caesars and Cleopatras of their day. Their main development was to turn the open amphitheatre into one which was closed in and lifting the stage above ground level for the first time, fearing treachery afoot.

It’s a short journey to Shakespeare’s day when power, politics, love and comedy became the food of the masses. Scholars of Shakespeare do well to learn the inner meaning of the written and spoken word, for while on one level the meaning is clear, and often funny, there is always an inner meaning or undercurrent running through his dramas, which have meant that they are almost universally apt for any and every period in time. Just like the writings of Aristotle 2,000 years before him.

So how can you get your bright little thing to be the 21st century’s equal to Aristotle or Shakespeare?

Let them indulge in life’s intrigues, humour and tragedy – and experience them all at different levels – from the viewpoint of the working person to the highness of Princes, Princesses, Kings and Queens. 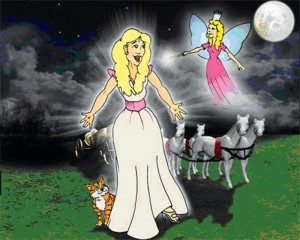 Developing a storyline fit for a future queen

The best way to illustrate what is involved is to develop a novel storyline. For children, that is best done initially by using a story they are familiar with, then asking them to develop it into a variant with new characters, themes, settings and outcomes.

Their biggest challenge is not the ideas – they bristle with multiple short storylines – but putting these into a structure and sequence which tells a story.

Take a good look at most kids’ (under 12 years) stories, and there are usually not too many words. Pictures still make up a big part of stories for the 6-12-year-old age group. By then their imagination takes over and their range of reading materials can quickly become vast. What happens over this development period is that they learn the words, their vocabulary from the stories they read, and then use it to convey their own ideas. Once they reach the end and see their words adorning the page, accompanied by the obligatory drawing of the characters in their story, they are hooked on writing. This is exactly what they have been brought up to read and now use in their own learning to write. If they get anything published, such as in the school magazine, they are then often hooked to writing for publication as one of their chosen routes of recognition in their future, wider world.

Below is an example of an eight-year-old reworking the story of the servant girl turned princess who ends up marrying a future king – a Shakespearean type storyline written by a little person.

A classical story re-imagined in 2013 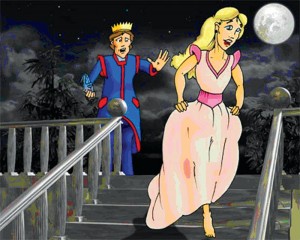 Once upon a time, there was a maid named Cinderella who was very kind. But she had three mean nasty sisters. Their names are dopey Dada, Lady Gaga and Racy Rachel.

One day, the sisters were invited to the ball.

Cinderella said, “Can I go too?”

Her nasty sisters all said a big “No”. “Why not?” sighed Cinderella. “Because you are too pretty” was their shouted reply.

Cinderella carried on with her chores, when she heard a voice. “Please don’t cry”, said the Fairy of the Ball. “I will help you to go to the ball.”

And so she did.

Cinderella arrived at the ball. The handsome prince noticed Cinderella standing on her own and asked if she wanted to dance. The kind, charming Prince met his dream of a young enchanting girl and fell under Cinderella’s magic spell. He later asked her to be his Princess. And they live happily ever after…with their twin babies – one a handsome boy, the other a feisty adventuresome tomboy of a girl.

This selection is personal, eclectic. It is not a recommended age-specific reading list – your English language and literature teachers at school can give you those.