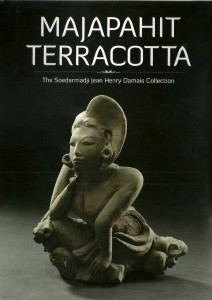 At its pinnacle in the middle of the 14th century, Truwulan, the East Javanese capital of the puissant Majapahit Empire was a bustling metropolis with broad avenues, huge manmade lake, waterways, trees, soaring temples, palaces and bustling marketplaces. According to Odiric de Pordone, a contemporary of Marco Polo and the only westerner to ever visit the inner sanctum of the high Javanese royalty, it was one of the world’s greatest wonders. Odiric who would travel on to China and return overland wrote that the tiles and staircases of the Majapahit palaces were paved with gold and silver. Prosperity was not only limited to its royal classes but even commoners who enjoyed such amenities as running water in their homes five centuries before Europeans.

Amazingly and in spite of their fabulous wealth both the princes and peasants of this glorious kingdom preferred the warm, intrinsic beauty of one of the most common and malleable of materials – terracotta – above all others. Their virtuoso skills resulted in a mindboggling array of architectural and sculptural masterpieces that know few peers. So, too, their potters turned and shaped magnificent water vessels and pots with lyrical motifs and smooth red surfaces using iron oxide. In contrast to the black stone used exclusively in Central Java they preferred brick. The bricks were laid with a minimum of mortar allowing for a smooth red surface. The technique is still used in Bali today.

For those interested in savouring this art, a recently published book – Majapahit Terracotta – from BAB (Buku Antara Bangsa) is a perfect starting point. Written by art historian extraordinaire, Soedarmadji Jean Henry Damais, it is illustrated by a selection of the highlights of a collection he put together over a period of more than 30 years. The son of the great French scholar, Louis Charles Damais, the 73 objects within is the best book published on the subject until now. Mr. Damais, who was the curator of several museums in Jakarta, fell in love with terracotta early in his illustrious career.

In some ways the depictions of people and animals including dreamy princesses, courtiers, warriors, dwarfs, fat children, peasants, frogs, birds and monkeys can be seen as snapshots of the era’s daily life. Usually expressionistic, the artists moulded the red clay quickly and with great dexterity thus injecting the images with life and movement. Indeed many of the small statuettes are so lifelike that they appear to be portraits of real people the artist had sit for him. This is a great rarity in Indonesian art where humans are usually idealized and based on typology not actual life studies as in Europe. Even the so-called portrait statues, those used in royal ancestor cults, representing deceased kings and queens are based idealized, symbolic representations that do not intend to resemble the actual physical features of any real person.

Jungle scenes, often seen on pillar bases and other architectural elements are exuberant with lifelike foliage and flowers surrounding buildings and even hidden figures and creatures in a variety of intriguing poses. One type of stand used for pots is decorated with the distinctive blossoms and leaves of the sacred lotus. These same decorations appear on either side of huge Majapahit stone statues depicting the highest kings and queens. This magical world is populated with monsters as well – kala guardian monster masks, like those seen above Balinese temples, the Gadjahmina elephant fish and double headed fantasy beings.

The Majapahit style would travel with the empire into the provinces – as far north as Padang Lawas temples in northern Sumatra and the temples of Muara Jambi, a once huge temple complex that originally featured long beautiful Venetian-like canals running into the Batang Hari River. The terracotta arts of Bali and Lombok are also in debt to this legacy.

As told in another story written for Jakarta Expat (22 June, 2011) East Java is also the original home of the piggy bank. Actually an image of a wild boar (celeng), the Majapahit choose boars as an appropriate shape for a terracotta bank because they were synonymous with wealth and growth. Notably no piggy banks appear in the book probably because they are so common.

During the colonial era thousands of pieces of terracotta were found in the fields around Truwulan. Several plantation owners would start buying them up from farmers and workers. Between 1913 and 1918, the Dutch colonial architect, Henri Pont Maclaine, began an in depth study of the Majapahit capital that would continue for many years. He played an instrumental role in the establishment of the Truwulan Museum, which still remains one of the best places to see artefacts including terracotta dating from the Majapahit period. The architecture and art would strongly influence his work, which incorporated native Indonesian designs. One of his most famous buildings is ITB, the Bandung Technological Institute. Many of the pieces he excavated in Java are still there.

One form of iconic Majapahit terracotta is the kendi, a water vessel with a spout that allows one to pour the liquid into your mouth without touching your lips to the spout. This was very important because it allowed people of different status to share water regardless of their station. Majapahit kendi are noteworthy because the bulbous spouts are often round and resemble female breasts full of milk. At this point it is difficult to verify the reason for the shape, however, it appears unlikely that its resemblance and vernacular name (kendi susu) or literally ‘breast kendi’ was lost on the peoples of the Majapahit.

Countless statues, the majority of which are women, are one of the more common fines. In most cases the heads of this small statues have been purposely broken. This has been interpreted as proof that they were used for some sort of ritual purpose – perhaps even substitute human sacrifice. Animal sacrifice to appease the ancestors and gods, as well as bless the earth to guarantee its fertility are found throughout the region.

Terracotta was one of the first human technologies. One wonders who and why someone discovered not only that you can form clay into vessels and objects but more so that if you exposed it to fire it undergoes a chemical transformation that makes it impervious to both water and heat. This allowed storage of liquids and boiling and cooking stews and the like. Terracotta is also used to hold water and because of the way its respires the water is kept cool and fresh even when it is hot. Clay is indeed a cooling material with antiseptic and medicinal properties. Who would think that something this common could also be art?

Rumble in the Jungle