When it comes to New Year’s Eve parties, there are only two corners of the room: The corner where some eyebrow-raiser is busy trapping girls and trying to impress by asking if they have any idea what “Auld Lang Syne” means and the one on the other side of the room, chock-full of people plugging New Year’s Resolutions.

Making a resolution makes you a tool. But knowing that Robert Burns’ poem has a few meanings—go with “times gone by” or “days go by”— doesn’t bode well either. 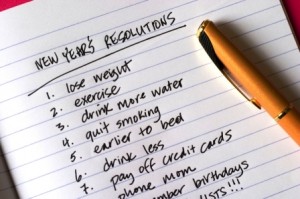 Resolutions, Oscar Wilde said, are simply checks men draw on a bank where they have no account.

That’s why the best thing about New Year’s Eve parties is laughing at the people with resolutions. After all, they’re not going to hold themselves accountable. So why should we?

There’s nothing sadder than bumping into a half-lit stranger in a crowded living room and having to watch as they sway slightly and spill gin over the lip of their plastic cup before they tell you they are going to “quit drinking” or see someone else get all wide-eyed as they scream over the stereo about how they are going to “make more time for themselves.”

What does that even mean?

Plus, a resolution is a pretty good indicator of character. If you’re standing with someone at a party and they tell you they’re going to start volunteering or giving to charity then call them on it the next time you see them. Some people’s egos write checks they can’t cash. Call them on it.

If you’re going to have a New Year’s Resolution at least let it mean something.

I would pay a million bucks to hear someone say, “I’m going to listen to less Coldplay.”

Now that’s a conversation I want to be part of. Not because I hate Coldplay, but because I actually want to know what would compel anyone to want to listen to less Coldplay. How much Chris Martin is too much Chris Martin? A person who makes a resolution like that has seriously taken stock of their life. They have something to say.

At the same time, if someone said, “I’m going to stop stalking my ex-girlfriend on Facebook.” I’d clear my dance card and hang out with that guy the rest of the night. Full stop. Because even if he’s creepy, you know he’s going to end up doing something memorable. If everything goes right you might get to help him pick out a new tattoo, watch him fall over a railing or, if you’re really lucky, grab a cop’s gun.

Once, at a New Year’s Eve party years back I heard a guy say, “My New Year’s resolution is to stay out of jail.” That guy became my best friend. He’s also made partner at his law firm at 32.

But the girl in the gladiator sandals who says she wants to “travel more,” or the guy who spends the night checking out girls but inevitably wants to “ remember to tell his girlfriend she is beautiful more often” are just plain sad.

I would go to more New Year’s Eve parties if I could wear a Halloween mask. That way you wouldn’t see me wince or roll my eyes.

Instead of making resolutions we should just change. There’s no reason we can’t get off our asses today and do the right thing. If you want to lose weight, put down the fork. If you want to start volunteering there are a million places out there. But to stand around with a bunch of other people and just throw meaningless resolutions in the air is laughable. Don’t be that guy.

So when it comes down to it, make the right call. And if you can’t think of something original or appealing just lie—lie your face off.

Foreigner Chased by Residents After Hit-and-run