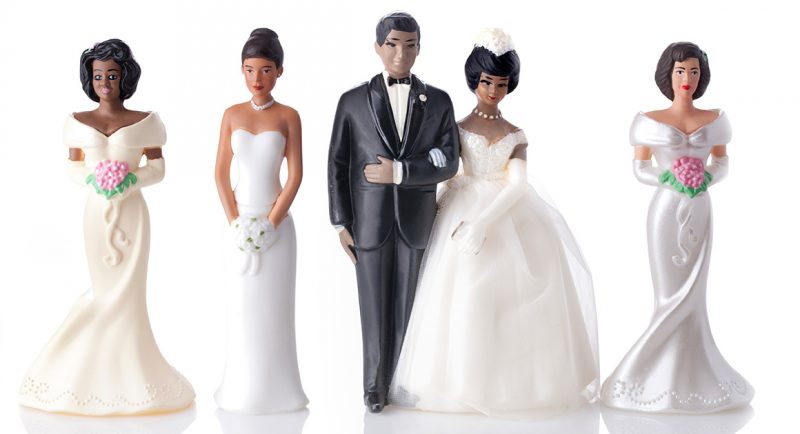 The guiding principle of Indonesia’s marriage law is monogamy – one man with one wife – but polygamy is still tolerated under certain circumstances.

A man, who prefers to remain anonymous, going only by the name of Agung, owns a clothing shop in North Jakarta. In the store, two polite women in hijabs occupy the front desk, while Agung takes inventory in the back. “They are both my wives,” explains Agung without looking away from a stack of T-shirts. “We work here together while [our] kids are at school. Sometimes one of us stays home while the other [two] come [into the shop].” Agung and his two wives practise polygamy.

The marriage practise of polygamy has been hotly debated in Indonesia for years. Some consider it normal for a man to take more than one spouse, while others see it as unjust behaviour that undermines women’s rights everywhere.

Throughout Indonesia’s history, male political leaders, influential figures, and even clergy have adopted the tradition; including the nation’s first president, Sukarno, who took more than five wives.

With the history of polygamy in Indonesia in mind, academics believe the practise is relevant to life and culture in the nation as we see it today. Islam considers polygamy as ‘mubah’, which means it’s not technically prohibited, but not really recommended either. Religious law mandates that a Muslim man is allowed to have up to four wives, so long as he is able to treat them all fairly. This, of course, is a subjective rule up for interpretation. For activists, it’s an egregious ambiguity that warrants further scrutiny.

Prophet Muhammad (believed to be Islam’s final prophet) adopted polygamy during the last eight years of his life. According to the Islamic scholar Ibn al-Atsir, polygamy was used by Muhammad as a strategy to improve a woman’s social position in the Arab feudal system. During the seventh century AD, women and widows had low social status in society, and men were allowed to marry as many times as they wanted.

As the story goes, prophet Muhammad started to criticize the arbitrary behaviour, and soon restricted the rules of polygamy. Muhammad asked his friends with several wives to divorce some of them, and just keep four.

If we look back to the eighth and tenth centuries, before Islam was introduced in Indonesia, most of the kings of ancient Mataram (the famous Hindu–Buddhist kingdom in Central Java) took more than one wife as well. Polygamy today is prohibited in Hinduism, according to scriptures, and academics believe the practise was only used as a political tactic at the time.

Indonesia’s polygamy issues are controversial to say the least. In 2003, high-profile Javanese restaurateur Puspo Wardoyo took four wives. He then instituted an event called the Polygamy Award at Hotel Aryaduta in Jakarta. This event aimed to promote transparent polygamy and to recognize men who successfully applied polygamy in their families. The event attracted a tidal wave of public attention, and quickly became one of the highest trending topics in the media at the time.

Apart from hundreds of invitees, protesters from various organizations across Indonesia also attended the event. The Indonesian Women’s Association spoke out against this event and polygamy in Indonesia at large, claiming the custom promotes violence against women.

Polygamy flared up as a hot issue in 2009 due to the inception of the nation’s ‘Global Ikhlwan’ polygamy club. The club originated in Malaysia, and has garnered more than 300 members in Southeast Asia to date. It was officially established in Bandung with 38 members that year.

The club once again spurred controversial debate among several organizations. Indonesia’s highest Islamic clerical body Majelis Ulama Indonesia (MUI), was asked to ban the club. However, MUI responded to public outcry, saying that Indonesia is a democratic country, where anyone has the right to set up an organization so long as it causes no societal harm.

In July 2015, the defense ministry issued a circular letter stating civil servants were allowed to have more than one wife under certain conditions in Indonesia. This decision received a slew of criticism from activists and the media. The ministry responded, saying the decree was in fact meant to discourage officials from polygamy. As the conditions were extremely difficult to fulfil, officials wouldn’t want to find themselves in breach of the law, said the ministry.

In order to have more than one wife, the civil servant must submit a statement from his wife or wives. He must also be found in stable financial condition to support all of his wives and children under one roof. If a polygamist employee didn’t meet all the requirements, he would be convicted in a court of law, and be fired from his position.

Again in 2015, Indonesia was shocked when yet another polygamy club cropped up. The community known as Forum Keluarga Poligami Sakinah (Sakinah Polygamous Family Forum in English) began as a WhatsApp messaging group. The chatroom acted as a social sharing space for polygamous families. It wasn’t long before it became a full-fledged organization. Since its inception, the group has grown bigger in Indonesia, and recently held a meeting with around 270 members in Sumendang, West Java. This group aims to discuss obstacles faced by Indonesia’s polygamous families, and build a plan to file a judicial review of Indonesia’s official marriage law from 1974.

Forum Keluarga Poligami Sakinah also believes Indonesia’s regulations complicate the practise of polygamy. The guiding principle of Indonesia’s marriage law is monogamy – one man and one wife. Polygamy is tolerated but controlled under certain conditions. According to the 1974 marriage law, permission to have more than one wife is granted by the courts only if the applicant’s wife is “unable to perform her duty as a wife”, suffers from physical defects or an incurable disease, or is incapable of producing offspring.

“The important [thing] is that we love each other,” says Agung, with a smile at the back of his clothing shop. “Our life works for us. That is all we care [about].”