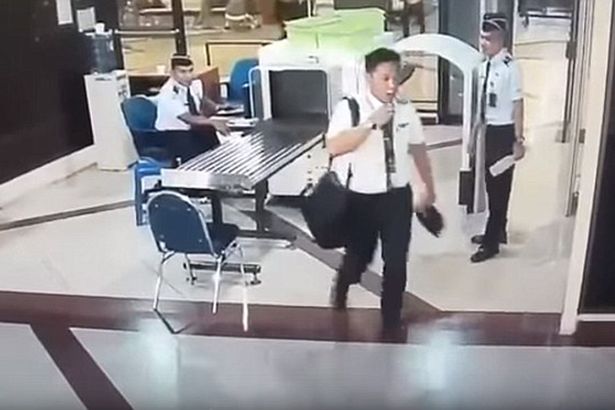 An airline pilot in Indonesia has been terminated after he came under suspicion of trying to fly a commercial airliner while likely under the influence of alcohol.

In interesting video that has ended up making the rounds online, Citilink pilot Tekad Purnawas stumbles through Juanda International Airport in Surabaya on Wednesday. Three security personnel tried to help Purnawas by picking up things he dropped after going through the metal detectors.

Despite being noticeably impaired, Purnawas still managed to get himself into the pilot’s chair of the Airbus A320 bound for Jakarta before making a bizarrely incoherent flight announcement over the intercom to the passengers.

Passengers aboard the plane were confused by what he said due to his slurred speech. One person even took a video.

Several people deboarded the plane because they believed the pilot was drunk. Another pilot came and took his place shortly thereafter. The plane ended up being an hour delayed due to the whole incident. 154 passengers stayed aboard for the trip.

Citilink is a subsidiary of Garuda Indonesia, and the company said the pilot indeed appeared “physically unfit”. Days after the videos hit the web, two top executives at Citilink announced their resignation as an act of responsibility for the fiasco. Burhan announced his resignation on Friday.

The resignations signify a hit to Citilink’s reputation in Indonesia and may even hamper the company’s plans to expand in 2017.