Corporate structure in Indonesia is the same for most foreign-owned companies. However, it is often that the organisational layout in Indonesia is confusing foreign entrepreneurs.

What roles are the shareholder, commissioner, and director playing in your company in Indonesia? Who can access your corporate bank account? How do you terminate a director or a commissioner?

If you have questions about foreign-owned company (PT PMA) registration in Indonesia, here is an introduction:

Shareholders are the owners of the company and thus at the highest position in the hierarchy of decision-making through the general meeting of shareholders (GMS).

Board of Commissioners (BOC), however, is there to supervise management policies. They also advise the Board of Directors (BOD) who, following the Company Law in Indonesia, are mostly responsible for the company’s management and fluent operations. 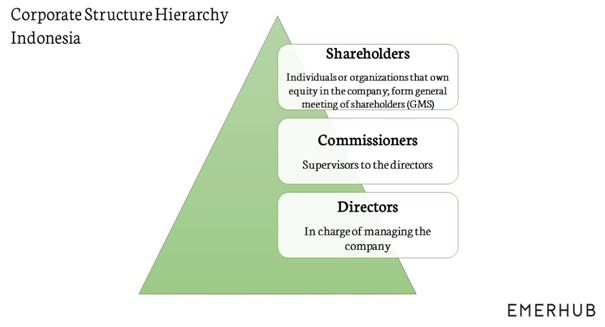 Who can be shareholders in Indonesia?

Shareholders are the people, a company or a foundation that own an equity stake at your company. All companies in Indonesia, also locally-owned PTs, must have at least two shareholders.

If you are planning on using nominee shareholders in Indonesia, make sure you do it the safe way.

Shareholders have any authority not given to the BOD or BOC within limits specified in the Indonesia Company Law (40/2007) on Limited Liability Companies or the Articles of Association (AoA).

Shareholders themselves cannot be held personally liable for legal relationships entered into on behalf of your company. They are also not liable for the company’s losses that exceed the shares they own.

Also, their liability is up to the capital statement letter (even if the funds have not been actually transferred) – as per the issued amount of shares stated on AoA.

Read more about the minimum capital requirement in Indonesia.

As the GMS has rights which cannot be transferred to the BOD or BOC, changes that take place in the company often need the shareholders’ permission via the general meeting of shareholders.

These changes can be, for example:

To make a decision, the GMS has to meet the following requirements:

Below are some examples of the requirements for a GMS to be able to make a decision.

Rights and obligations of shareholders

Shareholders are those who subscribed to and paid the capital of the company. It is not possible to issue shares without a nominal value. The Articles of Association should clearly define the classification of shares, rights attaching to each share and the nominal value of each share.

Some of the classifications of shares are:

With having shares in the company, shareholders have the following rights:

In addition, shareholders will exercise multiple other rights under the Indonesia Company Law (40/2007) on Limited Liability Companies. When choosing corporate shareholders, consider the fact that Indonesia has a double tax treaty agreement with over 60 countries.

Non-resident dividend recipients’ final withholding tax is 20 percent; however, it is lower for treaty countries (between 10 – 20 percent).

Corporate shareholders also need to have the Articles of Association (AoA) approved by a public notary in their respective country. The AoA is where you specify the regulations for your company’s operations, demonstrate how you handle financials and settle roles within the organisation.

It is wise if a foreign investor considers AoA in advance. As for in some countries, for example, Thailand and Australia, it is usually not a must for companies to have it by law. Keep in mind that in Indonesia, foreign companies must make AoA before becoming a shareholder here.

Commissioner or Board of Commissioners’ (BOC) task is to supervise the company. However, their actions must always be in accordance with the articles of association.

According to the corporate structure in Indonesia, they also supervise the board of directors and  give advice to the directors.

Commissioners are not part of the daily company management. But when it comes to owning company shares, they can, but are not required to have any.

Updated regulations on choosing your commissioners

When a company is 100 percent Indonesian-owned, the commissioner must also be Indonesian.

The directors are in charge of company management in accordance with any policy that is appropriate by the Indonesian Company Law or the company’s Articles of Association (AoA).

The general meeting of shareholders (GMS) is appointing, replacing and dismissing members. The appointment duration of a director is stated in the AoA.

Your PT PMA needs at least one director. If you plan on having more, one of them will carry the title of the President Director. The directors will then have joint responsibilities and liabilities based on the corporate structure in Indonesia.

Let’s say your BOD consists of two or more members – in that case,  the GMS will determine the dividing of management tasks and authority.

Directors are not employees of the company, thus not protected by the Employment Law and have different treatment from employee. Directors’ salaries, festive holiday payments, health and other benefits are regulated differently and decided by the General Meeting of Shareholders.

Obligations of a director

Some of the responsibilities are:

A non-resident director cannot sign documents on behalf of the company. Therefore, the director has to first process the work and stay permit immediately after their appointment as a director.

The access to your company bank account is rather flexible and depends on the request of the shareholders. Approaching the bank, your company shareholders file a request for as many signatories as necessary to represent the company. Let’s say one of your directors or even a combination of two people from your company takes care of it.

However, it is a must that at least one of the directors is handling the company bank account.

If you plan on setting up a company in Bali, read more about the specifics of opening your personal or company bank account in Bali.

The general division between commissioner and director of PT PMA

Difference between commissioner and Director of PT PMA in Indonesia is relatively simple. One is advised by the other – without the consent or need, the commissioners must not act on an executive level. Though, a question arises if all BOD members are absent or have a conflict of interest.

We have made a clarifying table, Board of Commissioners vs Board of Directors in Indonesia:

Termination of a director or a commissioner in Indonesia

The general meeting of shareholders can terminate any member of the board at any time. However, it is not as a straightforward process as it may sound.

The termination by the GMS must follow a bureaucratic process: 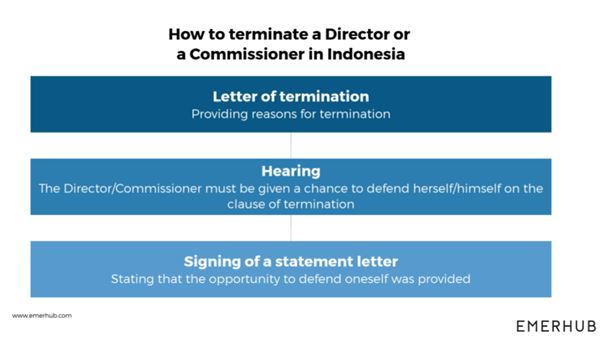 However, if the director or commissioner agrees with the termination by signing a statement letter upon receiving the letter of termination or resigns themselves, it is not necessary to conduct a hearing.

How to avoid termination of a director or a commissioner

You can avoid the necessity of having to terminate a director or a commissioner in Indonesia by choosing one of these alternatives.

#1 Nominate a resident director or commissioner from Emerhub

When appointing a nominee director or a commissioner from Emerhub, we will provide a resignation letter in advance. The letter will also give the GMS full power over termination of the named director or commissioner.

#2 Limit the term of office

Another alternative to avoid having to terminate a director or a commissioner is to limit their term of office in your company’s Articles of Association.

You can limit their term of office from five years to one year, and the term will end as per the Articles of Association, without having to follow the due process.

Emerhub provides the commissioner and director service for interested parties. For further inquiries, reach out to us by sharing your contact details on our company registration page.

GIPA Advocates Careers in Artificial Intelligence for an Advanced Indonesia