I have long held a fascination with the tear shaped island clinging meniscus-like to the Indian sub continent. Their cricketers – always the bravest underdogs – have been my “other’ team since the first Cricket World Cup, 1975 when Mendis & Co. endured a terrible battering from the fearful Lillee and Thomson. Decades later I had proudly eaten a Ceylon chicken curry the night before war-torn Sri Lanka defeated Australia and lifted the 1996 World Cup.

I first visited Sri Lanka another dozen years later, when the civil war was at its height. Disregarding corporate travel advice I stayed at the astonishing historic Galle Face Hotel – it sits next to Galle green, on the beach in the centre of town, as did once the Raffles Hotel – which had long been high on my list of Hotels at which to stay.

The air raid started at 11 the night I arrived. Jet lagged and early to bed, I was awoken by hotel staff asking me to turn the light off, something of an irony as I had only turned on the light to answer firstly the phone, and later the door. The raid itself thankfully came to nothing – by then the Tigers had no planes. As with many incidents in Colombo I wondered whether there really was a raid, and if there was whether it really was the Tigers behind it. But the raid, or non-raid, was enough to convince my concerned hosts that I needed to stay in another hotel – and so the next morning off to the relatively sanitized Cinnamon I did plod.

An old friend of mine had travelled extensively to Colombo in the 1970s, and I met him a couple of years back. We talked much of Colombo but the Colombo he described to me had buzzing restaurants on every corner, pubs and clubs and sounded great fun. To me it was unrecognizable – it was as if he was describing somewhere in the future. By the time I first arrived in 2008 the city was heavily patrolled and pretty much moribund at night, though it was possible to find a Mojito at 2am if you tried hard enough.

Below the surface I also found that Lanka was even more like the 1970s – a much under-rated decade if you ask me – than it looked – hotel bars were firmly modelled on the 1970s English pub, female fashions appeared to have been stuck ever since 1975, trade unionists gave long-winded speeches and were to be feared and (the best bit), every radio station played non-stop 1970s classics.

The war ended – abruptly and tragically – in 2009, and so last year I stayed once more at the Galle Face, this time without unwelcome interruption. My room was a few metres from the ocean and I slept with the windows open, until the disco started on Galle Green. Lankans were slowly recovering their neglected ability to party and the buzz was returning. I even heard some 1980s music. New nightspots were opening every month.

I have not been there for over a year and now I want to get back to visit Lanka and see what’s happening. I want to see my many kind hosts again, and with them try the Ministry of Crab, recently opened by two Sri Lankan cricketers, and see where else I can find that once-elusive 2am Mojito.

There are still very few international chains of everything, and still plenty of 1970s music on the radio. If only for those reasons I do recommend that anyone half-interested travel there and go there soon. Sri Lanka is a small country and it is remarkably easy to get around. The people are great company. The Rupee has recently devalued and everything is terrific value. There are non-stop day flights from Colombo on Mihin Lanka. Other flights are generally overnight via KL or Singapore. 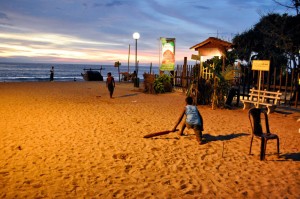 Visitors from Indonesia will find much is familiar. Firstly, it’s actually very near – at least to Northern Sumatra, and is physically very similar. Indeed in many ways Lanka belongs to Southeast Asia, despite its proximity to India. My Malaysian colleagues told me that it really does look a bit like Malaysia might have looked in 1980, with touches of Thailand present in the many statues of the Buddha, and in the pictures of the head of state on every street corner. The food is essentially Southeast Asian too, and delicious at that.

For all that, Sri Lanka makes quite a contrast with Indonesia – it still has nothing of the commercial fast lane – the biggest mall in Colombo is not much bigger than the Louis Vuitton shop in PI, but it nonetheless contains a better small bookshop than I have found anywhere else in Southeast Asia. Lankans are sports mad and a game of cricket or rugby is never far away.

Colombo is a fascinating and beautiful city – it would make a damn good film set double of Georgetown in Penang – another of my favourite Asian cities – and surely no other Asian capital is so green and clean. Stay at the Galle Face Hotel and eat at Paradise Road Cafe, Barefoot, Lemon, Mango Tree and the Ministry of Crab.

Galle sits on a tiny isthmus on the southern coast and is the most beautiful city I have visited in Asia (and has two remarkable luxury hotels within its ramparts – the Galle Fort is incredibly nice, nicer even than the Aman). Its massive historic city walls saved the city from modern development, and moreover saved its inhabitants from the terrible Asian tsunami. We loved its peaceful atmosphere. At the other end of the luxury scale I must recommend a small and ridiculously inexpensive Indian restaurant, up a spiral staircase above an antique shop looking out over the sea near the lighthouse. It is called the Indian Hut, with a familiar red hat-shaped logo.

Kandy is a delightful cool city in the mountains and is close to the tea plantations. Its main street is curiously reminiscent of rural Surrey. I’d recommend the Suisse Hotel for its quaint colonial charm, and position on the lake.

The beaches are deserted and perfect. I’ve heard the east coast beaches are the best, though I’ve yet to get that far. The bay at Trincomalee looks quite special.

Yala National Park in the South will get you as close to crocodiles and elephants as you would ever wish. The nearest town, Tissa, is a delight, with stunning Buddhist monuments.

The mountainous centre of the island offers endless pursuits – be they Buddhist temples or antique trains through tea plantations.

Do try the food – especially hoppers for breakfast – similar to an api in Indonesia, smoked seer fish, and the daal and curries. The local beer is terrific and I seem to recall they mix a damn fine Mojito – best accompanied by hot fried spicy cashew nuts.