On the second Sunday in May, I received a message from my childhood best friend in Manado, Gracia “GP”. “GC, what are you doing June 1-8? Let’s go island-hopping in Selayar & Takabonerate!”

I said yes. South Sulawesi—of which Selayar and Takabonerate are part—is a destination I’ve been dying to check off my bucket list. So I flew in 10 days earlier to explore the mainland. My other friends Dian and Rio—siblings I attended middle school with in Papua—generously welcomed me in their home in Makassar.

Rio has travelled his entire K-shaped island many times. He said, “I don’t think we hung out much when we were kids.” He’s always been the rebellious adventurer and I was the outback version of prissy princess. And yet 13 years later, our common passion for travelling has led to an unlikely reunion. We put our faith in each other as he offered me a 1400-kilometre piggyback-ride on the motorbike.

Fresh off the plane, Rio and I started in Bantimurung, Maros. The national park is famed for a butterfly park and a pleasant trek up the block waterfall. The river flows still green waters that turn white as it cascades downstream into serene waterholes. We skipped the butterfly museum but delicate papilions, sometimes in pairs, were spotted throughout our walk. 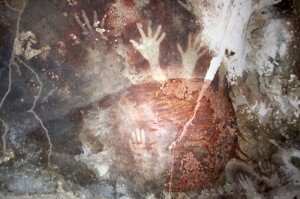 Suddenly, it rained. We took shelter and wrapped our electronics in plastic. “Kemarau never comes,” I quipped about the late May showers. Alas, my fantasy of hot tea and instant noodles wasn’t coming true, so we moved on riding underneath the cloudburst to Leang-Leang, a karst cave with prehistoric paintings on the walls.

It was past dusk prayertime, but Rio negotiated with the gatekeeper to let us in. It was probably good that the park was closed and it was pitch dark, because otherwise the steep climb would have scared me. With faith in my flashlight and Rio’s instructions, I managed to photograph the famous painting of the leaping babyroussa with handprints “chasing” after it.

The ride home was picturesque, with a myriad of stars twinkling over the silhouettes of karst hills and ricefields.

After a futile search of Enrekang’s Japanese bunkers and war caves, we headed straight to Tana Toraja. At Londa, I instantly felt like entering another world as we came face to face with a stone tomb decorated with thousands of figurines of deceased persons. From a distance, an eerie church choir was rehearsing, seamlessly blending modern Christianity and ancient ancestral rites.

We stayed in a mechanic’s garage near Makale, then visited a living tree in Kambira in which more than 100 deceased babies were put to rest. Bodies, in fetal position, would be inserted into holes in the trunk and covered by straw. The trunk then regrows over the holes and absorbs the bodies. The tree bleeds white sap, which is believed to substitute the mother’s milk and nourishes the baby with the energy to make it to heaven.

Our next stop was Palopo, where I intended to check out the remnants of the Luwu Kingdom, but the palace was under construction. Instead, Rio decided to detour 220 kilometres eastbound to Sorowako, a remote mining town on the banks of the pristine Lake Matano. It was the most scenic drive of our journey, coloured with blue mountains, green forests and rivers, red earth, warm sun and fresh air throughout.

As we headed back southbound, we cancelled a visit to Lake Tempe due to floods in Sengkang and instead shopped for handwoven silk in a local’s home. We continued to Soppeng where we visited Villa Yuliana, a 1905 Dutch-Buginese house that now serves as a museum. It overlooks the Masjid Raya and is surrounded by trees that house flocks of sleeping bats. After touring the infamous Boné Royal Palace in neighbouring Watampone, we overnighted at the harbour near the fishmarket in Sinjai and visited the Gojeng hills to view the megaliths and Kepulauan Sembilan. 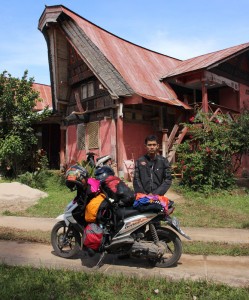 Rio and I parted in Bira, the southeastern port famed for fierce seafarers and the making of phinisi ships. I boarded the ferry to Selayar to meet GP and a band of interesting travellers.

Selayar is surprisingly rich in history, which deserves a story of its own. Benteng, the charming hub of the 100-kilometre long island, is a balmy rustic fisherman town kissed by gentle sea breezes and sunshine. The inhabitants are passionate about the sea and among the friendliest people I have ever met.

Takabonerate, the third largest coral atoll in the world, is a 4-hour boat ride southeast of Selayar. We stayed at a cottage in Tinabo, a miniscule resort island with a serene white sand beach right outside our doorstep. There is limited electricity and no cellular network, but perhaps that made for plenty of quality time for us travellers.

Many found it hard to believe that GP and I had been friends for 20 years and stayed in touch despite the distance. Likewise, we admired other people’s stories: a trio committing to travel Indonesia for a year, a freelance architect looking for faraway inspirations, a travel consultant researching new destinations, a jovial dive blogger who wants to photograph dugongs, and a couple in love. We come from different parts of Indonesia.

We’re sad to learn that over 50% of Takabonerate’s vibrant coral reefs are damaged by bombs and potassium. That said, the sights of paradise-like landscapes and gorgeous sunsets made it worth the trip.

My favourite memory was stargazing the immaculate night sky in Tinabo—photographing the Milky Way, experimenting with “light painting”, and sharing the moment with one of my best friends and a couple new ones.

Back on mainland, I bummed around Bira’s beaches with new friends. The owner of the harbour-view villa we shared is a seasoned boatmaker brimming with stories of the sea.

On my way back to Makassar in a shared car, Rio “kidnapped” me in Takalar. He took me to Puntondo, a secluded ecovillage, to walk the mangrove-covered beaches and meet the friendly locals, who aim to make their village an exemplary conservation project.

My trip to South Sulawesi makes me feel that I’m a very fortunate woman. I live in a beautiful country, whose stories trace back to an eternity before my existence and will remain long after I’m gone. And I get to share them with old and new friends, whose kindness and generosity I’ll forever cherish. But now, it’s time to wrap up my holiday and get back to work!

Dubai: The City With it All