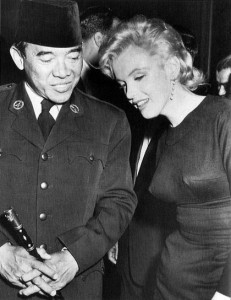 An Englishman living in Jakarta, never a fan of intimate female companionship, made the mistake of accepting an offer from a pimp to introduce him to friendly, young Indonesian men. One Saturday evening, he received an unannounced visit from the pimp, who had brought along a youth. The Englishman thought his visitor looked unpleasant, unattractive and underage, so asked him to leave. But the unwanted escort refused to go.

Moments later, two gangsters burst into the house and accused the foreigner of molesting their “younger brother”. They demanded compensation, but the Englishman refused to be intimidated, not least because he had not touched the youth. Thus, the four of them ended up at a police station. Fearing he would become the subject of a lurid TV news report or scandalous newspaper article, the expat agreed to a financial settlement with the gangsters.

The police detective, taking their statements, concurred there was no criminal case and then typed up an agreement, whereby the Englishman made a payment of Rp.1 million to the older of the gangsters “for the purchase of an iPod”. After the cash was handed over and hands shaken all round, the detective felt duty-bound to give the foreigner a lecture. “We have thousands of beautiful girls here in Indonesia, thousands; so why do you need a boy?” he admonished. “And if you must have a man, why not take one like him?” he added, pointing at the leering older gangster pocketing the money.

Scammers are equally adept at using the Internet to exploit sexual desire for profit. A 22-year-old Singapore man met a 17-year-old girl, Yap Siew Ting, in an online chatroom called Alamak.com. Within a month, she began to strip for him on camera, so he reciprocated and masturbated in front of his webcam – unaware that Yap’s boyfriend was recording him. The boyfriend then threatened to upload the compromising footage unless the man paid him money. He ended up paying S$97,350 in 89 transactions over nine months before going to police. The blackmailers were arrested last year. Police discovered they had five other victims, all men in their 20s. Yap was sentenced to two years’ supervised probation, while her boyfriend received five years in jail and five strokes of the cane.

The Soviet Union’s secret police, the KGB, was famous for its stable of female spies assigned to seduce foreign diplomats, who would then be recorded in compromising positions, after which they could be blackmailed. There is a wonderful anecdote – possibly apocryphal – that the KGB tried to spring such a honey trap on Indonesia’s founding president Sukarno during his 1959 visit to the Soviet Union. The story goes like this: Sukarno was notorious for his voracious sexual appetite and numerous conquests, so the KGB tasked several female operatives to pose as air hostesses on his flight to Moscow. The women then joined him at his hotel for an orgy, which KGB men secretly filmed from behind two-way mirrors. Sukarno was later taken to a screening room and shown a copy of the film, with which the Russians intended to blackmail him into taking a more pro-Communist stance. But Sukarno was delighted by the film and requested copies to take home, claiming Indonesians would be proud to see their leader with such beautiful women.