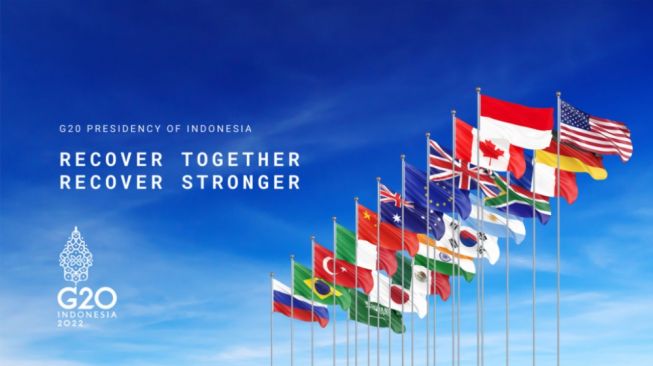 US President Joe Biden has said Russia should be excluded from the G20, a 20-nation economic group, because of its invasion in Ukraine while Indonesia has remained insistent on still inviting the nation.

Biden raised the topic during his meeting with a number of world leaders in Brussels, Belgium on Thursday 24th March 2022 after Russian President, Vladimir Putin, reportedly said he wanted to attend the G20 summit in Bali, with the chair held by Indonesia.

“My answer is yes, depending on the G20,” Biden said, when asked if Russia should be excluded from the group.

Biden also said that if countries like Indonesia and others do not agree with Russia’s expulsion, then in his view, Ukraine should be allowed to attend the G20 meeting.

Australian Prime Minister Scott Morrison said that allowing President Putin to sit at the same table with other world leaders was “a step too far“. Furthermore, the Ukrainian Ambassador to Indonesia, Vasyl Hamianin, called for a rejection of Putin’s planned arrival to the G20 summit because his presence in international forums is an insult to democracy, human dignity, and the rule of law.

“A boycott of Russia and Putin in all possible meetings, international platforms, and high-level conferences. This will be a real step to end the situation in Ukraine,” Hamianin said, quoted by Tempo, on Wednesday 23rd March.

Any attempt to exclude Russia is likely to be vetoed by other members of the group, and this risks dissuading some countries from participating in the G20 series of meetings, the source said.

The Indonesian government, through the Foreign Affairs Ministry, emphasised that Indonesia was impartial in its role as chairman of this year’s G20, amid calls for Russian President Vladimir Putin not to be invited and for Russia to be expelled from the forum following the invasion of Ukraine. However, at a press conference on Thursday 24th March, Indonesia affirmed its neutral stance.

Djani added that when chairing various conferences, forums, and organisations, Indonesia adhered to the applicable rules, and the G20 was no exception. “Therefore, it is the duty of the G20 president to invite all its members,” she said.

This statement was issued after confirmation emerged that Russia had accepted an invitation from Indonesia to attend the G20 summit in Bali in November and that President Putin wanted to attend, as revealed by the Russian ambassador in Jakarta.

“It will depend on many, many things, including the COVID situation getting better. So far, the intention is … he wants [to attend],” expressed Russian Ambassador to Indonesia Lyudmila Vorobieva at a press conference in Jakarta Wednesday 23rd March.

Regarding the issue of Russia being expelled from the G20 due to the invasion of Ukraine, Vorobieva said the G20 is a forum to discuss economic issues and not a crisis like Ukraine.

“Certainly expelling Russia from such a forum would not help solve economic problems. On the other hand, without Russia it would be difficult to do so,” she said.

Vorobieva urged Indonesia not to be swayed by the pressure from Western countries.

“We sincerely hope that the Indonesian government does not succumb to the terrible pressures applied not only to Indonesia but so many other countries in the world by the West,” said Vorobieva, who also said Russia was actively taking part in all G20 meetings.

According to Dave Laksono, a member of the House of Representatives Commission I, which is in charge of foreign affairs, among other things, Indonesia should not touch the Russia-Ukraine conflict in the G20. The G20 was formed to discuss rights related to economic development, improving people’s welfare, facilitating access to capital, and improving people’s business capabilities globally.

“Ukraine’s problem with Russia is a conflict that originated from the foreign policies of a number of Western countries which are considered to be contradictory or dangerous to Russia’s domestic problems.

“Therefore, the focus of the G20 should not be carried in that direction, even though what happened there is considered a violation of state sovereignty. It should be resolved in existing forums, not at the G20,” said Laksono answering BBC News Indonesia’s question.

Support for Russia’s importance in the G20 was also voiced by China, one of its members, saying Russia played an important role.

The G20 is a multilateral cooperation forum, consisting of 19 countries and one economic area – the European Union. Indonesia is the president of the G20 this year.