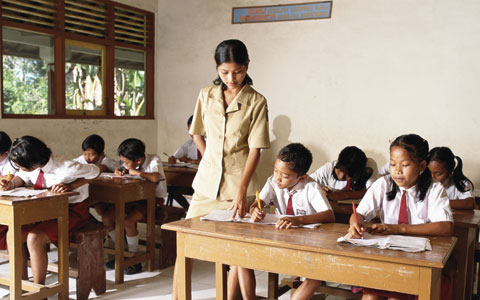 A group of teachers is taking on the law in the Constitutional Court with a case claiming the criminalisation of teaching under the Child Protection Act after a string of high profile clashes between educators and authorities.

“What do experts think about the deviation of child discipline at school? For example ditching, not doing homework, tardiness, smoking, disturbing their friends at school to fighting. About what kind of disciplinary punishment, what action should be given to a violation like this?” asked Asrun, the attorney of the teachers, as reported by Detik.

The questioning was submitted during the trial of judicial review of the Child Protection Law and Teachers and Lecturers Law at the Constitutional Court Building, Jalan Medan Merdeka Barat, Jakarta on Monday, June 12, as quoted from the MA website, Tuesday, June 13.

Asrun reflected on shifting societal norms, noting that while in the past it was acceptable for a teacher to discipline a tardy student by pinching, this would now be considered a crime.

“How does the expert see such a shift in norms? And what is the effect on the situation of schooling if the teacher remains penalised or subjected to criminal offenses against disciplinary action?” Asrun asked.

Educational expert Udin Winataputra said the educational process is a long term commitment for each student and changing student behaviours should be part of that process, not punished. Educators themselves should also set strong examples.

In 2012, Sari Asih Sosiawati, a teacher at a state elementary school in Tiuhbalak, Baradatu pinched a student on his upper belly because the student had failed to show up for a test twice. After a doctor confirmed the bruising, the victim’s father reported the incident to Baradatu police. Sosiawati could face up to three years in prison.

Last year, Samhudi, a physical education teacher at Raden Rahmat Junior High School, was sentenced with six months in jail after a pinching a student who refused to participate in afternoon prays. The sentence shocked the public, with claims the court had been influenced by the child’s father, who is a member of the Military (TNI).

Also last year, Jamilah, a 39-year-old part time teacher in Radak Baru Village in Kubu Raya district of West Kalimantan, cut the hair of a student as a form of punishment. The student’s parents in turn cut off Jamilah’s hair in revenge.

Sri Wiyanti Eddyono, a law expert from UGM, said punishments commonly meted out to schoolchildren are not in accordance with their rights. Eddyono cited a United Nations General Comment from 20016 from the Committee on the Rights of the Child which defined corporal punishment as any physical infliction on a child causing pain, regardless of how mild.

“Corporal punishments include hand beating, throwing something (at them), using something to hit, pinch, strangle, block, twist or force the child in a certain position. The Committee also notes that there are other non-physical punishments that are not in accordance with the rights of children, such as a punishment through words that can degrade children,” Sri said.

UNICEF aims to put an end to corporal punishment and other forms of violent behaviour in the classroom through the application of the Positive Discipline approach, which was developed in late 2012.

Margaret Sheehan, the Chief of the UNICEF Field Office in Jayapura says: “We need to break the myth that violent punishment can have positive effects on children.”

“Global research has shown that violence has negative effects on children, causing them to fail in their studies, drop out of school, adopt violent attitudes, or even suffer mental and physical health problems,” she said.

A group of teachers are now in the process of suing the government over the Child Protection Act, which they say should be given a clearer interpretation. The 2014 law says:

Every child is entitled to protection in educational units from sexual and violent crimes committed by educators, education personnel, fellow learners and / or other parties.