Feeling like a socialite in New York, I head to a trendy bar before the big gig to meet one of the event’s organisers. But my illusions of glamour are quickly crushed when we enter Cafe Mondo and are ushered into a tiny room upstairs. The funky basement room, full of posters, artefacts and art is being refurbished and we’re not even allowed a peek.

It had been a while since I’d met Kendra, one of Studiorama’s organisers. We order Bintang beers and peer around the room. Hanging behind Kendra’s head I recognise the watercolour drawings of Arrington de Dionyso.

“Malaikat dan Singa, or Angel and Lion,” Kendra corrects me. 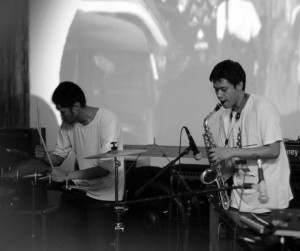 It seemed ironic to be reminded of a big figure in the experimental scene on this night. Arrington de Dionyso, from Washington, America, is a hugely influential figure in Indonesian music. He even learnt Indonesian, just to ‘impress a girl.’ In 2011, I watched him play the bass clarinet in Malang; since then he’s been performing across Indonesia and currently in America, with his music project, Malaikat dan Singa. Bold and shamanistic, Arrington often sings in Indonesian. He cites diverse influences, including Tuvan throat singers from Siberia. Yelling or trembling as loud as possible in his music, perhaps Arrington is searching to see if any patterns show—suggesting, maybe, that music’s soul is an attractor in the great chaos of the universe.

Finishing our drinks, we head next-door to Koi Cafe Gallery on Jalan Kemang Raya in Kemang. We climb in the escalator and exit at the third floor. We’re early so we sit in the lounge and are joined by a musician from Jakarta – Duck Dive. His music is stylish and electronic but also very Zen. The layers are like rocks in a Japanese garden, sometimes big and noticeable, yet intricately placed. Interestingly enough, the artist Duck Dive has lived in Japan and can also speak the language. I notice a pattern emerging: innovative music seems to be concerned with traversing culture – or at least investigating it. Perhaps culturallyaware artists first perceive the boundaries, and then break through them?

In the smoky night of the bar, tight-fitting leggings and high boots wobble to the front of the crowd, as a girl with wavy hair and a thick layer of lipstick waits for the first band, Jirapah, to warm up. In the shadows of his dreadlocks, a man seduces a sleek, highcheeked girl who swings hair between her fingers. The patient crowd sips on free drinks of Albens Cider. Drinking this traditionally English drink, I am reminded of pubs by the River Thames and naturally head to the balcony to look at the view. Joined by Kendra, he explains the concept of Studiorama. We chat in the breeze as skyscrapers, trees and a swimming pool float beneath us.

“We were fed up with the music scene in Jakarta,” Kendra explains. “And we wanted to do something about it.”

Breaking the monotony with some good music became their sole goal – hence the birth of Studiorama. The owner of Koi Cafe Gallery liked their concept and allowed them space to host their project. 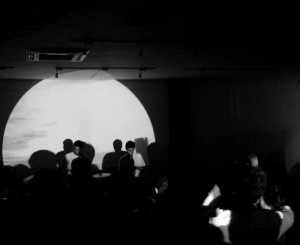 Studiorama’s fourth event is eventually soldout and with our stamp-printed hands we watch the first band, Jirapah, begin. Formally based in New York, Jirapah play dark yet compelling songs; the indie rock with a hint of pop soothes the crowd. I am reminded of black forests at night: the music is eerie, yet entrancing. The girl in tight leggings lavishly marches to the front, stealing a few glances on her way. I peruse the back of the room where Studiorama’s merchandise of t-shirts and bags line a table, all designed by Kendra, before bumping into a friend.

“I came to see Jirapah,” she smiles, out of breath with excitement.

The second band, Space System, makes me put down my cider. One of the musicians stares like a misanthrope – as if music had taken him to a higher knowledge and we’d been left behind. The charming percussionist smiles and they begin. Their first song is a verse on time. Visuals of big white clocks drift behind them. The beats tap into my mind and slow down my thoughts. The songs are a slice of dynamism, multi-layered, pushing my consciousness into unknown territory, or into Mars, like a fantasy novel in sound. Their next track, influenced by the songs of birds is equally as intoxicating. I lean with the crowd, sip some cider and read the flyer: ‘Space System are signed to the record label Space Rec.’

“They were fantastic.” I whisper to Kendra, hinting that this band had surpassed, no, blown up my acid test.

The crowd is now dense. The final band, Kracoon, jolts the audience out of its meditative slumber. If artists like Arrington are trying to penetrate the chaos, then musicians like Kracoon are trying to create it, with artistic motives of course. He even dismisses conventions of standing on stage and plays behind the projector screen instead. With colourful, flashy visuals and electronic music, I am reminded of the way life passes without narrative – how my thoughts move quickly, ending abruptly without conclusion or meaning. Even Kracoon’s own website kracoon.com sets up its own narrative traps and questions the assumptions of language itself. 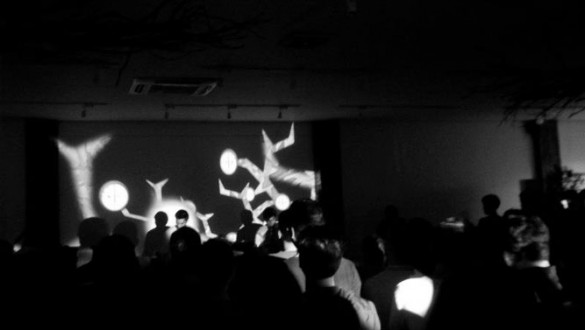 As I reflected on the night and the idea that these musicians and visual artists are breaking boundaries, I couldn’t help but feel that their sole imperative was to unify us. To find a common ground amidst the chaos, like finding a ligand, a key, to unlock the mind and allow us to sink into a place of warmth where our self-consciousness disappears. The audience didn’t ‘go wild’ and start stripping off their clothes in an attempt to break more boundaries. Instead we quietly congregated together and nodded our heads in time to the beat. We allowed the music to do the thinking for us as we drank apples, in the cider and it felt good.