Due to the intertwined histories of Indonesia, Malaysia and Singapore, some “Indonesian antiques” actually share their roots with our Malaysian and Singaporean neighbours. In this article, we will look at some historical artefacts that have their origins firmly in Indonesia. 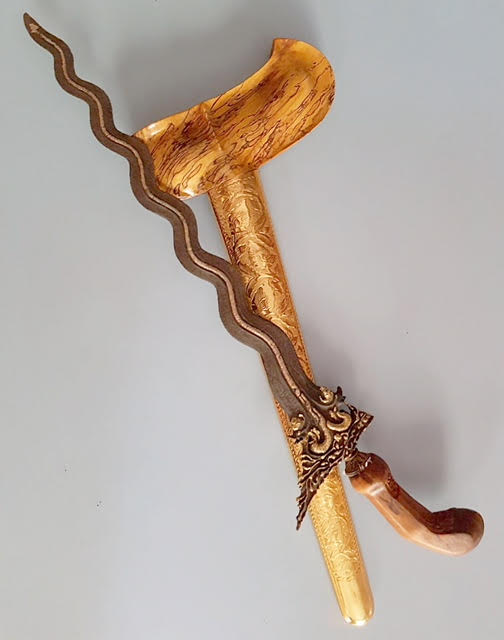 The keris is a special type of dagger originating from the island of Java. Throughout history it has been used by some of the largest empires in Southeast Asia. These include the Malaccan Empire, the Singhasari Kingdom and the Majapahit Empire. It has also been used by the Sultanate of Maguindanao, meaning the keris has even reached the southern Philippines. The blade is created by using alternating laminations of iron and nickel, which is how the intricate patterns are formed.

According to legend, the keris has supernatural powers which its owners can use to save lives. This can be done by washing or bathing the keris on the first Javanese lunar new year. Then, the dagger is offered a selection of fragrant flowers, rice and incense. General belief is that poor treatment and neglect of the keris can cause its magical powers to disappear into the spiritual world. Translated into English as “oil lamps”, lampu minyak were very popular in the 1800s when they were first introduced by the Dutch colonisers. Electricity was hard to come by, especially for colonies that lived in far-off villages, hence lampu minyak were the best sources of light. These lamps come in diverse designs – from plain and simple to those that were decorated intricately and meticulously. These oil lamps were popular up to the 1980s before they fell out of use due to the introduction of electric lights. They are often used as a last resort during blackouts. These beautiful lamps are still sought after as antiques and are powerful and attractive reminders of our past. The oldest known record of wayang kulit goes back to the ninth century. Wayang kulit (literally “skin puppet”) is a puppet made of leather stretched across a frame used to cast shadows on a screen. The shadows portray characters from legends such as Ramayana or Mahabharata. The wayang kulit puppet is sought after by collectors because it represents the essence of Indonesian culture.

In a wayang kulit performance, the dalang, or the shadow artist, uses a taut linen screen to clearly display the shape of the characters. The dalang manipulates the position of the puppets and the light source to create shadows and illustrate the stories. This type of bicycle, known as the “roadster” is a type of utility bike, highly popular in the 20th century after being introduced to Indonesia by the Dutch. It was one of the most common types of bicycle used from the 1950s to 1970s. From around the year 2000 onwards, Indonesians gave up their bicycles and started using motorbikes for transport. Around the same time, due to its historical significance, the sepeda ontel became seen as a unique antique and is now sought after by students, undergraduates and office workers as a means of transport and as a protest against global warming. A brangkas kuno (old fashioned safe) is a safe made of wood or metal that was used to keep valuables safe. They vary in size and appearance; most are like large cabinets, occasionally with elaborately engraved details. Some people, however, opted for a smaller, simple metal box. Now, the brangkas kuno is used for decorative purposes in homes and is preserved because of its historical importance.

I Do: 6 Perfectly Romantic Wedding Venues in Indonesia

Allow Guardians at The Hermitage Jakarta Cater to You