Located in Sudirman Central Business District, ASRI (a subsidiary of Agung Sedayu Group) introduced ASHTA on Wednesday 11 November 2020. Carrying “Embrace the Newness” (Embrace New Change), ASHTA offers many surprises for the people of Jakarta from a group of industry experts who are passionate about building a home, retail and space for lifestyle.

“ASHTA is here as a destination in the middle of the capital city for those who are looking for new things, need a comfortable place to build relationships with the community, and also want to develop yourself,” said David Hilman, Chief Operating Officer of ASRI.

ASHTA itself comes from Sanskrit which means Eight. This name is taken from numbers eight in District 8 and the eight elements for the good life. ASHTA is here as a destination that respects rich culture and traditions and pays attention to quality community life. Therefore, ASHTA pays close attention to all aspects; starting from world-class architecture, green open space, and beautiful interior design.

Level Gym, a personal training studio from Singapore, is officially a part of ASHTA. Established in 2014, Level Gym focuses on providing training and education, wellness practices, as well as rehabilitation services for its members. After its success with two branches in Singapore, Level Gym will accompany sports and fitness activists in Jakarta for the first time, “Whatever you’re here to create, let’s take it to the Next Level”.

Another surprise came for fans of the Signature Fox “Kitsune” Biscuit. Maison Kitsune along with Café Kitsune, a clothing brand from France that is thick with a combination of two cultures, France and Japan, are also part of ASHTA. Occupying the area next to the Garden Lobby, Maison Kitsune presents a chic and Instagram-worthy design. 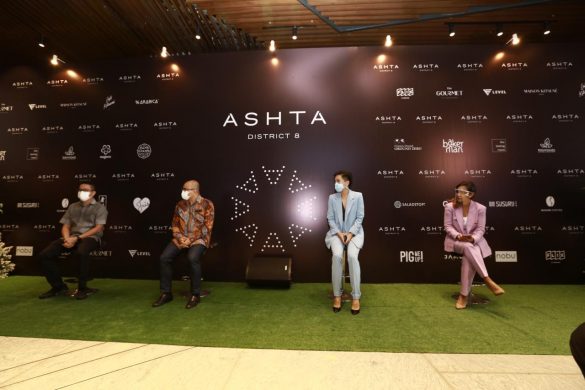 Not only these two brands, but there are also a number of other brands that don’t want to be left behind. Some of them are FLIX Cinema, The Gourmet by Ranch Market, Arabica, Locus, Ground Zero by Common Ground, Bakerman, The Tasting Room, Bukanagara, Nagara Coffee, Yuukatsu, Goobne, Susuru, Lakon, Masshiro and many others. These brands will offer a fresh and different concept for ASHTA.

Previously, ASHTA had successfully hosted two major events in Jakarta, namely Brightspot Market and Urban Sneakers Society in 2019. Deputy General Manager of Leasing ASRI, Jessa Setiabudi, said that in the future, ASHTA has planned to present art workshops on a weekly basis that collaborate with established and emerging artists.

“We want to celebrate life. The enthusiasm and passion of artists, musicians, retailers, designers, beauticians, culinary entrepreneurs, and health activists will stand together and support ASHTA,” added Jessa.