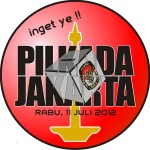 By late afternoon on July 11, the day Jakartans will be casting their votes, most of them will already have an idea who their next governor will be for the next five years. In the arena are incumbent Governor Fauzi Bowo, who is paired with Nachrowi Ramli, the chairman of the Jakarta branch of the ruling Democratic Party; Alex Noerdin, the governor of South Sumatra, with Nono Sampurno, a former Marine general, as his running mate; and Joko Widodo, popularly known as Jokowi, the mayor of Solo, who is in the race with Basuki “Ahok” Tjahja Purnama, the former head of Belitung district in Bangka-Belitung province.

The other three tickets are former Speaker of the People’s Consultative Assembly (MPR) Hidayat Nur Wahid and economist Didik J. Rachbini, both of whom are backed by the Prosperous Justice Party (PKS) and the National Mandate Party (PAN), and two independent candidates, namely economist Faisal Basri and retired Army general Hendardji Soepandji. Faisal and Hendardji have prominent Jakarta community figures as their running mates, a wise but apparently ineffective choice as surveys show so far. According to the election commission, the net worth of the six tickets is some Rp180 billion or an average of about Rp30 billion each ticket. Fauzi, a career Jakarta municipality employee, personally leads the pack at about Rp50 billion.

For the past three months, the six candidates have been busy jockeying for the Jakarta governor’s seat, pressing the flesh with the city’s populace. During campaign rallies, election staff members dole out cash money, distribute free T-shirts and lunch boxes as candidates make their sales pitch. The latest surveys show Fauzi leading with Joko and Hidayat, respectively, trailing behind. By law, a candidate wins if he receives more than 50% of the votes. However, most analysts agree that the race will be so tight that a second round seems inevitable, which would be held on September 20.

But in the end, it seems to matter little to Jakartans as to who will oversee their lives until 2017. As they see it, Jakarta’s problems are so overwhelming and insurmountable, any ticket will do. Said one long-time Jakarta resident: “The problems are perennial, while the funds needed to address them will never be available. So it doesn’t really matter who the next governor will be. The difference will be a matter of style and emphasis only.”

Most believe in the conventional wisdom that only someone with a military background would be able to get the chaotic city in order. As they see it, “Jakarta is run by thugs and the mafia”. But in the grand scheme of things, that seems a minor issue. For Jakarta, the 2012 total budget of Rp.36 trillion (about $4 billion) focuses on education, transport, flood control measures, environment and housing, and makes no mention of rooting out crime. From legislators’ perspectives, who approve the budget, that is strictly a Jakarta Police matter.

While Fauzi’s leadership can hardly be described as awe-inspiring or imaginative, he has actually earned several feathers on his cap. Official figures show that the number of poor dropped from 4.48% in 2007 to 3.64% in 2011. In the economic front, it grew from 6.44% in 2007 to an albeit modest 6.70% in 2011. Meanwhile, the East Flood Canal (BKT) in eastern Jakarta was completed in 2011 in ways that enabled it to protect 2.7 million inhabitants in East Jakarta from floods. It must be said, however, that the project is planned and funded by the central government. By the same token, Jakartans’ level of welfare rose on the back of the construction boom of the private sector, and not by any means due to any municipality initiative. In other words, Jakartans would still get the BKT and new malls anyway, no matter who the governor is.

High on Jakartans’ minds, of course, is the horrible traffic with little signs of improvement. According to Jakarta Police, about 7 million motor vehicles comprising 4,800,000 motorcycles and 2, 500,000 four-wheel cars were on Jakarta’s streets in 2011 on a daily basis. On average, about 1,100 new motorcycles and 216 new cars hit the city’s streets every day. While the total number grows by 9% per year, the same period sees new roads being built at the pathetic rate of 0.01%. Sure, you can build a couple of overpasses and underpasses here and there, but only so much. Again, no matter who wins the gubernatorial race, he will not be able to solve the problem anytime soon.

As campaign managers mull which streets in Jakarta need to be canvassed with banners or posters of their deep-pocket candidates, or which districts call for them to make their personal appearances in, they will find out money is there for the asking. They will also find out that money is not everything; what matters most is the voter’s perception over who can deliver the promise for a better Jakarta. It would be interesting if Jakartans decide to vote for ‘outsiders’ such as Noerdin or Joko. Now, that is a fresh approach to an issue money cannot buy.

Experience a New Level of Luxury at SIWA Cliffs Lombok