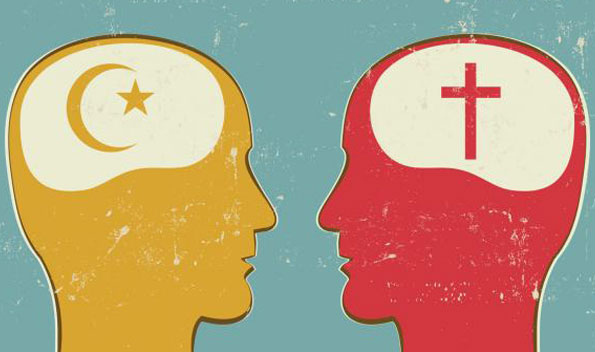 As Indonesia develops, its people are becoming more transient. Jakarta is a melting pot of people of various religions and ethnicities from all around the archipelago, and Bali’s growing economy has brought in thousands of migrant workers from Java and Madura, fueling Denpasar’s change from a provincial city to a traffic-clogged capital. Add in the growing number of expatriates now living all around Indonesia, and the millions of Indonesians, overwhelmingly female, working abroad, interfaith romance is nearly inevitable. As people mix, love emerges in new, unforeseen ways. With it comes rifts; tradition versus modernity, religion versus secularism, globalization versus culture. Cinta Tapi Beda is taking a private issue and bringing it to the public sphere.

There are no official statistics about interfaith marriage because Indonesian law only allows for religious, not civil, marriage, and thus one of the marrying couple must convert for the marriage to be recognized. This, not surprisingly, creates difficulties. Who should convert? What will the families think? What will be the reaction of religious, especially Islamic, authorities? Some choose to get married abroad and then try to get civil courts to register the marriage, but this is only an option available to the well-off. Others get fake ID cards that state different religions, or convert “officially” to get married, but continue to practice their original faith in private. From any angle, it is a situation with few good options.

Caught in-between are countless sad stories. A convert whose own family no longer speaks to her, a child of interfaith marriage whose grandparents refuse to participate in her life. Family bonds are tantamount in Indonesia. When broken, couples often have nowhere to turn. Organizations, such as Jakarta-based Paramadina, which promotes an alternative interpretation of the Koran that allows for interfaith marriages, provide help but often are limited in funds and scope.

Expatriates face unique challenges. Conversion may seem like a minor barrier coming from societies in which religion is considered a private matter, but in Indonesia, where atheism and agnosticism are unknown concepts, it can take on great importance. Gender also plays a role as Islam specifically allows males to marry other “people of the book,” Christians or Jews denies this freedom to females. Moreover, Indonesian families may expect or insist that the children be raised religiously, whatever the parents’ wishes.

There is a Human Rights angle as well. Indonesia is a signatory to the Universal Declaration of Human Rights, which clearly states in Article 16:

Men and women of full age, without any limitation due to race, nationality or religion, have the right to marry and to found a family.

The United States referred to the restriction on interfaith marriage in its 2009 Human Rights report on Indonesia as an “impediment to freedom of religion.” Amnesty International and other organizations have also stated that love is a Human Right, but have not put much pressure on Indonesia to change its laws. With so many international Human Rights issues of greater magnitude, it is unlikely that pressure will come from outside. Remember – in much of the United States only 50 years ago, marriage between people of different races was illegal, and that the impetus for change came not from the top, but from the grassroots.

So how does the couple in Cinta Tapi Beda resolve their situation? To me, conclusion is not as important as the fact that the film is bringing to light issues that were, for too long, kept in the dark. Despite localized controversy, such as a recent anti-film protest in Padang, this shows progress. Indonesia has a long history of tolerance it can build from. Even today, my Muslim Indonesian friends know the Ramayana, a Hindu Epic, and invite me to watch Wayang Orang, shadow puppetry that would be considered haram in many Muslim countries. There is a historical and cultural basis for a more open system towards interfaith marriage but only if people call for change.

As for the ending, you’ll have to see for yourself. For those who understand Bahasa Indonesia, check out Cinta Tapi Beda at a theatre near you. An English subtitled version should come to DVD soon.