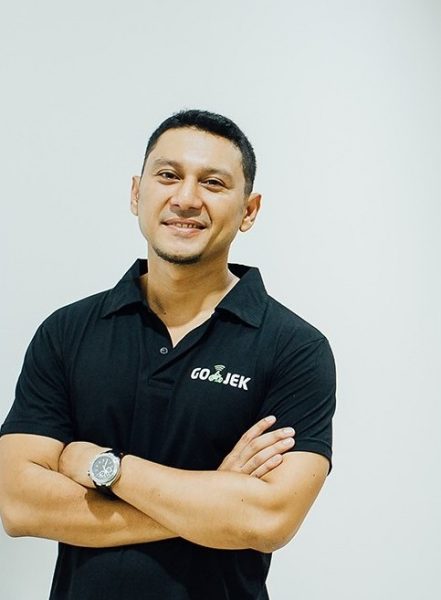 GO-JEK, the army of green-helmeted motorbike taxis that has taken over the streets of Jakarta, Surabaya, Bandung and Bali, provides fast transportation and delivery services via mobile application. Their core values of speed, innovation and social impact have led to the company’s huge success. We meet Co-Founder and Brand Manager Michaelangelo Moran to find out more about this social enterprise that everyone is raving about.

Let’s start with the fact that GO-JEK is a social enterprise and not a business – can you please explain this to us in more detail?

One of GO-JEK’s goals as a business is to improve the livelihood of our drivers by earning more income. As GO-JEK is essentially making that happen, there is a big social impact from the business, which has transformed GO-JEK into a social enterprise.

GO-JEK was established in 2010, however it is this year that Jakartans have really become aware of your brand. What contributed towards this giant leap?

Firstly, when we started the app six months ago, there was nothing like it in the market, which meant no competition. Secondly, the app works, and seeing as Indonesia’s smartphone penetration is far better than it was five years ago, the app is a major contribution to the success of GO-JEK today. It is user friendly; you can book a GO-JEK much faster than having a call centre; you can use GO-JEK credit to pay, making it cashless; you can see whom your driver is, track your driver and SMS or call him during your order.

When we launched the GO-JEK app, we had a system whereby people were given a referral code to give Rp.50,000 to others to try GO-JEK for free for the first time. This system blew up on social media and people were spreading their codes like wildfire. Once they tried it, they were hooked.

With now over 10,000 drivers, GO-JEK drivers are visible everywhere in Jakarta. With this, people become curious to try out the service.

As the founder, can you share with us the story that led to the birth of GO-JEK? 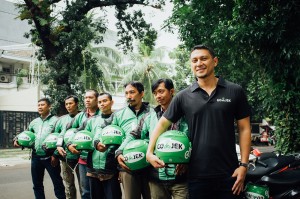 It started four years ago with our CEO Nadiem Makarim and me. Nadiem was studying in Harvard Business School and I was studying in the Academy of Art University. He hates traffic and therefore uses ojeks all the time and started building relationships with his drivers, asking them to do things like delivering items and doing his shopping. He took one of his drivers out for coffee and asked him how the ojek system works and found out that they are territorial; if they pick up a passenger from Sudirman to Kemang, they cannot pick up another passenger from Kemang – they have to go back to their pangkalan (base) in Sudirman. Secondly, there is a big queueing system; if they return to their pangkalan in Sudirman and there are 20 drivers there, they cannot pick up a passenger until all 20 drivers have picked up a customer. It’s an inefficient system.

We interviewed many drivers and asked what they’d think if we made a system whereby we give them customers and split the commission. They asked us if they could pick up passengers on their own, which we explained would mean no split of commission. GO-JEK was born.

We started recruiting drivers and building the GO-JEK system with the idea of three services – transport, courier and shopping. Fast-forward four years, from 200 drivers we are now 15,000 and have a mobile app that is number one on the Google Play and iOS stores in Indonesia.

Can you tell us how your fees to the customer are calculated?

One thing that makes GO-JEK really special is your pick-up and delivery service of food and beverages, GO-FOOD, with a delivery charge of Rp.10,000 at over 20,000 restaurants. What do you aim to achieve in the F&B industry by way of providing this service?

With the biggest organised motorcycle fleet in Indonesia, we want to create the fastest and most efficient F&B delivery service. To make it easier for our customers, we wanted to have a portal for menus for all kinds of restaurants from roadside warung to fine-dining restaurants, all deliverable in the GO-JEK fashion – fast and easy. We want to become the leader in this space, providing easy access to food delivery for office workers and residences, with a social impact by improving revenue streams for all restaurants in Indonesia. GO-FOOD is now present in Jakarta, Bali and Bandung and will soon be expanding nationwide.

How many GO-JEK drivers do you have on board now and can you share with us the benefits they receive when joining?

We have about 15,000 drivers onboard right now nationwide.

Some of the benefits include accident coverage, medical clinic for drivers and opt-in affordable health insurance for their entire families

We also do driver safety training with Rifat Driver Lab, training about 300 drivers per week, ranging from classroom learning, basic, intermediate, advanced and pro with a focus on how to create a culture of safety in driving, and eco-driving. All drivers are offered this, and we pay for one full day’s training. Drivers that have been through this training receive safety accreditation. We have also other programmes aiming to improve the livelihood of drivers and their activities while operating in GO-JEK.

There have been stories in the media recently of some of your drivers being threatened by non-affiliated ojek drivers. Can you tell us how you have been tackling this problem and protect your drivers?

To protect our drivers, we now have a third-party security taskforce that provides fast emergency response in situations that involve threats and intimidation. Our supervisors are also out in the field reaching out to and mediating with problem areas – this has proven to be a highly successful initiative to help ojek drivers see us as a means to achieving higher productivity and boost recruitment.

What do your drivers earn on average, and can you tell us about your bonus scheme?

Our drivers on average earn upwards of Rp.4 million a month, but a large percentage of them earn more than 6 million. For highly productive drivers that are able to achieve 10 trips in a day, we incentivise them with a bonus of Rp.50,000.

This year we have also witnessed the birth of your competitor, GrabBike, with branding that is quite similar to yours. How do you feel about your competitors?

Being the first mover, there was no doubt that competition would follow. After all, imitation is a form of flattery. There are quite a few local competitors: Taxi Jek, GO GO Jek, Antar Barang, and many others that have not entered the mobile app space, which we do not fear. GrabBike seems to be the one gaining presence in Jakarta. We feel that GO-JEK – given our national presence and vertical integration – is ahead of the competition. Given our wide fan base, we need to continue to provide superior service to beat well-funded competitors like GrabBike.

With the traffic in Jakarta only getting worse, what do you see as the long-term solution? What role will GO-JEK play in this?

Perhaps an incentive to use public transportation along with subsidised GO-JEK rides might be the way to go. Alternatively, fees could be introduced for major roads like Sudirman and Rasuna Said, like they do in Singapore. The infrastructure being built in Jakarta is already worsening traffic in areas like Wolter Monginsidi, Tendean, Pakubuwono and many others, not to mention the MRT building around Sudirman. GO-JEK’s role would be to provide a feeder system to these station points. Jakarta residents need to have access to the stations in order to use public transport and GO-JEK is the solution to that problem.

To get in touch with Michaelangelo Moran, please e-mail: [email protected]