A general awareness of green buildings in Indonesia, especially Jakarta is still not well organized due to people’s assumptions of green being expensive and not good looking, but green buildings are improving rapidly amongst a few building designs. The integrated approach towards construction and design of modern green structures is improving and this has encouraged builders to construct buildings that are designed, built and operated in a manner that increases health factors, well-being and productivity of people and the environment.

The concept of Green Building aims to increase the efficiency of  buildings by managing the use of resources such as energy, water and materials, while at the same time reducing the impact of the building on human health and its surrounding environment during its lifecycle, through better design, construction, operation, maintenance and removal and recycle of waste. Balancing the use of daylight, reducing the building’s power burden, and optimizing the cooling and heating loads of a building are a few of such measures.

Now here are a few success stories of green building design in Jakarta: these three are the perfect examples that being Green doesn’t mean being ugly. On the contrary, it proves that the Greener it gets, the more iconic it’s going to be for the scale of a city. 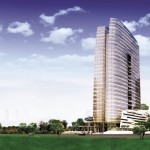 Based on the facade, this Allianz Tower adopts the concept of ‘green building’. This building is developed by PT Medialand – a member of Kompas Media Group, on a land of 7,000 square metres, and will consist of 28 floors. The design theme stands for openness and transparency. The building also merges the functions, arts, and high concern on natural environment by reducing the use of energy and water to make it eco-friendly with its design. The facade of Allianz Tower is like an open book which consists of two parts: ‘source of knowledge’ and ‘the importance of information’. The basic shapes of row and column on a newspaper are adopted in the design of the building by the horizontal and vertical mass; therefore, it creates a sleek appearance. 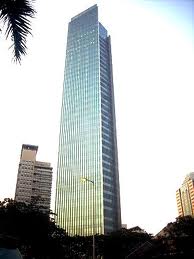 Designed by a renowned Architect, Kohn Pederson Fox, The Energy is a state-of-the-art office building in Jakarta. This building is located in the strategic junction of Jakarta’s premier commercial Sudirman Central Business District and is owned by PT. Api Metra Graha. The Building consists of 43 floors with five basement levels and a semi-gross area of 65,686.27 sqm. The Energy consists of new high quality and smart office accommodation, with an average of 1,500 sq m floor plate. These include state-of-the-art telecommunications technology; electricity and VRV air-conditioning for personalized control.

Epicentrum is located in the heart of Jakarta’s business district on an area of ??53.5 ha where PT Bakrieland Development Tbk built apartments, hotels, shopping centres, offices, meeting places, and Bakrie Tower as a potential icon of Jakarta. Bakrie Tower features a cutting-edge design by world-class architects, HO+K and Urbane. Most of its occupancy are top-notch companies who made big contributions to the national economy. Visually Bakrie Tower building has several advantages, namely the shaped twisting building structure that rotates on the axis of the building, where every floor there is a shift of about 0.47 ° or approximately 15cm. This office building is also equipped with hi-tech equipment such as fully addressable fire alarms, IP TV, VOIP, Internet, sound system, building automation systems, and others. This 50-floor tower is also equipped with a helipad.