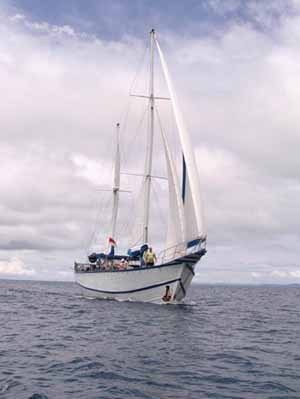 Kyle Blakeway’s love of the ocean runs deep: it started when he earned his junior open water dive certification —he was ten years old— blossomed over the years as his passion took him to Egypt and the Gilis and finally manifested itself in the purchase of the “Cecilia Ann,” a 60-foot ketch rigged sailing boat, anchored in Anyer, West Java, and itching to take holiday travellers out to explore to Krakatau, Ujung Kulon National Park, Panaitan and beyond.

Blakeway ostensibly came to Jakarta five months ago to visit his parents. But as luck would have it he ended up buying a boat.

“I’d been living in Australia and I was always thinking about buying a boat… always asking around and checking the Internet,” says Blakeway. “But then I came back to Jakarta and one of my mum’s friends actually knew someone selling one and when I saw the Cecilia Ann—I just knew I wanted it.”

But then again being at the helm of something like the Cecilia Ann, the wide-decked vessel, designed to providing ample room for up to 35 guests on chartered day-trips or sleep 10 as a live-aboard, was something the young entrepreneur, who recently took over the Cecilia Ann and Java Sea Charters, had been dreaming about nearly half his life.

Having been a certified open-water diver for more than half his life, experience is something this 22-year-old carries in spades.

Born in Cape Town, South Africa, and raised around the globe— everywhere from Athens to Sri Lanka—Blakeway, who started diving at the age of 10, seemed somehow destined to end up owning the four cabin cruiser, leading world-class dive trips and surf charters along West Java and up into the Sunda Strait.

Certified before he was even a teenager and awarded his Padi Dive Instructor certification at 18, Blakeway’s passion for diving and the open water has led him to some of the most exotic and sought-after dive locales on the planet, sacred spots such as Sharm el Sheik, Egypt, and the famous Gili Islands right here in Lombok.

Jakartans always complain about being stuck in the city for the weekend. But what they don’t know is how easy it is to be in the water and off exploring places like Krakatau and Ujung Kulon National Park, Panaitan or the wrecks of the both the USS Houston ‘The Galloping Ghost of the Java Coast’, and the HMAS Perth, which after being torpedoed in 1942 during the Battle of the Sunda Strait, now rests soundly at the bottom of Banten Bay on the lip of the Sunda Strait.

Some of the best diving in all of Java, Blakeway says, is right under our noses.

“You don’t need to go to Bali or Lombok and the Gilis to get your dive certification. It’s just around the corner, here in West Java. It’s a weekend away.”

The best way to make a weekend of it is to charter the boat with a few friends or colleagues and sit down with Blakeway, who has his Padi specialty license, and chart out a plan.

“How we’re doing it at the moment is we’re doing weekend trips. You come down Friday after work and you eat dinner at Blue Moon, it’s a nice little restaurant about a two-minute walk from the harbour and then you get on the boat at about 9 p.m. and go to sleep and then you wake up in the morning and you’re at Krakatau. So it’s Friday night, Saturday night and then you come back Sunday afternoon at around 4 or 5 p.m.”

More importantly, the young business owner is keen on passing his passion on to the next generation.

“We want to get the boat out some 20 times a month. I mean there are a lot of dive shops here in Jakarta, but none of them are really tapping into the schools. We definitely want to tap into the schools and get the kids out there.”

But it’s not just about the legendary surf or the one-of-a-kind underwater experiences available, for Blakeway, it’s about sustainability and preserving the reefs of West Java for the next generation.

Java Sea Charters works hand in hand with the World Wildlife Federation, on a project called “Build Your Own Reef,” where divers spend the weekend off the coast of Unjung Kulon combating the effects of dynamite fishing by reattaching transplanted coral harvested from areas unaffected by the bombing to concrete slabs constructed by local villagers, creating new coral colonies to help aid area reconstruction and sustainability.

“According to the WWF the coral construction has a very high success rate,” says Corine Tap, the former owner of the Celcia Ann and one of the founders of the project.

Tap explained that the project, which will celebrate its fifth annual dive and reconstruction weekend on June 18and 19, boasts an 80 percent re-growth rate along the 25 slabs the divers and locals have laid out to help boast coral regeneration.

“The weekend is all about giving back. It’s a small project, but we didn’t have to do much to get the divers involved. They’re keen on restoring the environment they love. The divers want their children to be able to enjoy the coral too.”